Lost In Marketing, Found On Blu-Ray...

The film was great, the marketing was deplorable... 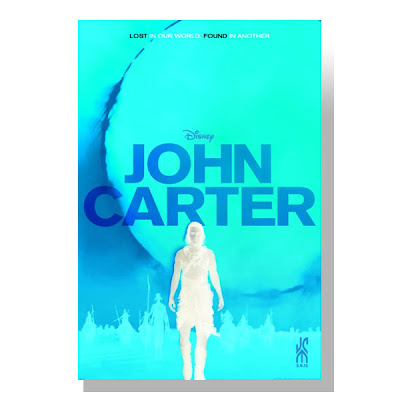 And if there is any justice in this world, heads will roll in the Mouse's marketing department. My friends and I sat there watching the film and kept shaking our heads. With all that is in this film, they couldn't pull together a decent trailer? A decent poster? Banner? Why couldn't they have focused on the romance in the film? That might have brought in more female viewers who aren't into the action aspect. Because really, the film is a romance, or a love story that happens to have a lot of action. How about a banner showing John Carter and the Princess in a romantic embrace? How about a poster that is more like the wonderful Frank Frazetta posters. There is a scene in the film that is shown a bit in the trailers. Carter jumps right into the swarm of oncoming Tharks and does battle. How about that as a poster? There are so many obvious choices and the marketing department dropped the ball.

The likelihood that a sequel will happen is a very long shot right now, but there are bright spots. The foreign market opened almost double what it did here domestically. And with good word of mouth and hopefully, brisk sales of DVD/Blu-Rays then the Mouse might take another look at it. But the said truth is a great film was handled very badly. The audience won't get to enjoy a charmingly, old fashioned film that is a throwback to the epics we would see as a kid, or even our fathers and grandfathers would have seen. John Carter (of Mars) deserves better than it got. And the Suits in marketing had eight to nine months more to figure it out since the film was delayed from last summer.

Perhaps Andrew Stanton is feeling a bit the way Brad Bird did after the release of "The Iron Giant" right now...
Posted by Honor Hunter at 8:01 AM

I saw the the movie and loved it. The people at the audience seems astonished with the quality of the movie. They didn't expected a movie so good. There was a surprise about that.

I saw the movie yesterday with my boyfriend and a few of his friends - all of us LOVED it. I can't wait for it to come out on DVD!

Agreed. It was a magnificent movie that had it all. We almost didn't go because it looked like one of those movies that was all action and no heart. But wow. I felt like it was one of the best movies I have seen since the Star Wars and Indiana Jones original trilogies (I did like the SW prequels too, but they lacked some of the humor that was so awesomely in play here.)

Not only could they have played up the romance, but the tough female aspect that played so nicely. When he said "maybe I should get behind you" it was a classic movie line.

The only fault I found with the movie was one bit of language that felt out of place in this day and age when (I believe it was) the bartender said God followed by something other than bless. It was unneccessary in a movie that had no other unreasonbly offensive language (hey, if I ended up on Mars I would use a few expletives as well!) that might offend sensitive viwers (like me :).

We saw it on Sunday afternoon with about 15-20 other people in the theater. It was the first movie that I remember where people were cheering when things happened (no spoilers here, but I was one of them at one point in the film.) It was as moving as when the Death Star went boom.

And yeah, I love the Iron Giant. I would have never seen that movie if it hadn't been for my Pete Townshend fanboy-ness at the time (and still a bit today.) True classic film that as well.

My friends and I do a movie-related podcast, and we spoke at length about the terrible marketing done for John Carter (of Mars) and how much we liked the movie. I am really disappointed in the way this was handled, but it reminds me of how badly Disney messed up the marketing for the movie The Rocketeer 21 years ago. Not knowing how to promote it, they seemed to devolve into some kind of lowest common denominator style of advertising. It's really, really sad.

From what I've read, all of the worst marketing decisions came from Stanton himself -- the first teaser trailer, the poster and banner images, the refusal to show anything good in the ads, the refusal to embrace the Pixar connection, etc.

Here's the Vulture article referred to by the above poster:

And Honor - don't let "Tron Unit" write stuff for your blog. His review was composed like a paste-eating grade school kid. Really embarrassing in both mechanics and content.

Don't worry, Anonymous, because of rude, disrespectful haters like yourself, I will no longer contribute to Blue Sky.

Yahoo! To all of you who support John Carter. I've been writing on every site everywhere I can that this is a GREAT movie! Disney did blow it...and maybe, just maybe, they will do a super DVD release and it will find a new audience. THEN we might get more JC of Mars. Cheers to Andrew Stanton and the crew...you made a fun and entertaining movie!