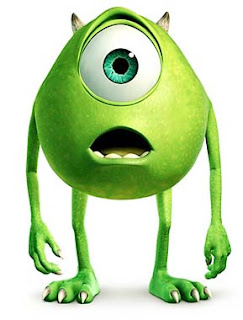 Thanks to "UpComing Pixar" for the hat tip.
Posted by Honor Hunter at 3:05 AM 1 comment:

I know I started this blog with a series of short post entitled "Most", so I believe this will fit into that for filing...

Zagat published an extensive survey of guest attending the WDW resort this week and here are the top five attractions. Well, with the small bits that are trinkling out of various websites, it appears we are getting an idea of what is happening at Pixar Animation Studios.

So the future of Pixar is this:

WALL-E(2008) - the new film by Andrew Stanton(Finding Nemo) that is Pixar's firts take on science fiction.

Untitled (2009) - one of the untitled films listed below will most likely be this offering. My bet is on Pete Doctor's film.

Toy Story 3(2010) - the long awaited sequel to Toy Story, this time directed by Lee Unkrich, the co-director of TS2.

I wonder if one of these untitled films is "The Princess of Mars" that was brought over from Paramount?

Thanks to "UpComing Pixar" for the hat tip.
Posted by Honor Hunter at 7:33 PM No comments:

This Fall Things Will Get Goofy...

I know some of the news I'm reporting is a few days old but I've been gone and am trying to catch up. I don't know if anyone has seen it but there is a great article over on Animated-Views.com with an interview with Disney Legends Andreas Deja and Mark Henn about the new Walt Disney Animation Studios new short "How to hook up your home theater" staring Goofy.

I can't wait to see this when it's released in the fall... possibly with Enchanted maybe? The poster for it is retro 50's check it out... Hopefully the Studio will ramp up and do two to four of these a year... they already have six in production so I hope at least a couple of those will come out every year. I also want the other originals (Mickey, Donald and Pluto) to appear in shorts too... I would relish the chance to see Donald staring in another short!

The six in production are:

"How to hook up your Home Theater" staring Goofy, directed by Kevin Deters and Stevie Wermers.

"Golgo’s Guest" about a lonely Russian frontier guard and his encounter with a space alien, directed by Chris Williams(this is the project that landed him directing American Dog).

"Prep And Landing" the Christmas tale of two inept Elves readying a house for Santa’s visit.

"The Ballad Of Nessie" which is a stylized account of the origin of the famous Loch Ness monster.

And two other unnamed shorts that are currently working their way through the pipeline, one of which is just starting production.

I can't wait to see them all. How about you?
Posted by Honor Hunter at 6:43 AM 3 comments:

Off On A Disney Vacation... Sorry for the lack of updates...

Been really busy lately and haven't had time to update much. I was not on a Disney Vacation, but there is lots of news though.

Meet The Robinsons came, disappointed and then did suprisingly steady business.

A new article concerning the new Goofy short is over at animated-views.com that I highly recommend.

Construction is almost complete and testing is going on with Disney's Finding Nemo Submarine Ride.

The Voice of The Frog Princess has been announced.

New Updates will follow shortly.
Posted by Honor Hunter at 2:52 AM No comments:

Dawn Treader Finds Someone To Steer Her... It appears Michael Apted(Coal Miner's Daughter, Gorillas in the Mist, Gorky Park) has been named the director the the 3rd Chronicles of Narnia film, The Voyage of the Dawn Treader. Apted is a very good, accomplished director whose most recent film, Amazing Grace was quite good indeed. I like him as the choice.

He's a talented director who is capable of creating compelling drama and character. Just don't have him direct anymore Bond films. The World Is Not Enough was enough... of his version of Agent 007.
Posted by Honor Hunter at 6:59 PM No comments:

The rumors are that the Hong Kong government has rejected plans for the POTC expansion.

This sounds grim, but we need to realize that construction wouldn't really begin till late next year and that gives Disney plenty of time to improve the situation... if this rumor is true.

Until then it appears Disney will try a number of events and promotions in addition to IASW to increase attendance. It's really too early to make a judgement on this. I've heard no concrete information that this is anything more than a rumor. It could just be something that started on a blog(Not this one), or it could be Disney trying to tone down expectations ahead of IASW.

If it is true, time will tell... the park will get better and more lavish... only much more slowly.

I'll keep my ear to ground on this.
Posted by Honor Hunter at 9:27 PM No comments: Adam Sandler will star as a real-estate developer/architect whose life is turned upside down when the bizzare, outrageous bedtime stories he tells his niece and nephew suddenly become real. Havoc, then ensues...

The Film, written by Matt Lopez, is being positioned by Walt Disney Pictures for a holiday 2008 release.

Bedtime Stories is Sandler's first time working for the House of Mouse. It appears as he's grown older and now has children he wants to start making motion pictures that they can see. Reflective, eh? It seems we all grow up... except for Peter Pan of course.
Posted by Honor Hunter at 4:49 AM No comments: