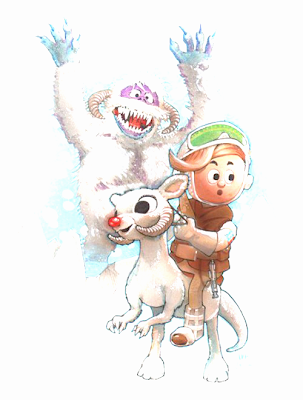 It looks like the Mouse is going to be giving us presents for years to come...

Maybe that post should say specials, as in plural.  Between the three episode films, which will now obviously be out in December and the two spinoff films which will most likely come out during the holidays as well, we will have at least five years of joyous Christmas gifts to open.  Essentially, five holiday specials over five years.  And thankfully, no sign of Bea Arthur anywhere.

Those of you hiding in a hole probably don't know about the recent announcement of the release date of "Episode VII" being December 18, 2015.  Now the three people that didn't know actually do.  I know that some of the hard-core purist will be upset that a May release date is not in the cards, but I prefer the film to be good and later, then bad and a slave to tradition.

The Lucasfilm Suits know that we don't want another disappointment like we got when the Prequels debuted.  J.J. Abrams and his crew are working hard to make sure we get the film we deserve, not the one some fans fear.  Being as Abrams is a fan, we shouldn't have to worry as much. The absence of the Jedi Master will make sure the minds are not clouded in the creation of this new chapter in the galaxy.  No more Jar Jars, no Midi-chlorians, please.

Starting next year we'll be getting new content for the next six years. Star Wars Rebels will bridge us between this year and the 2015 debut of the Sequel Trilogy.  I have a feeling after "Episode IX", they might take a breather, but there should be periodic films every two or three years from then on. Star Wars, specifically new Star Wars theatrical adventures should be a part of our future for decades to come. For fans of the series, and science fiction/science fantasy fans and geeks the world over it's great news.  Now if we can just get the Prequels released in a special edition that takes out all the bad parts.

Sadly, that would mean that "Episode I" wouldn't be very long...
Posted by Honor Hunter at 2:02 PM

Yes unfortunately, what they really should have done is reboot the whole series, and return to the original storyline where Darth was NOT Luke's father. I know that won't happen, but it just means they have to keep cleaning up their messes.

If Episode VII has Luke, Leia and Han as old people, that means they are only playing small parts, with the next generation taking up the story.

You mean we might be getting the original versions of the original series soon? Yay! I'd buy that in a heartbeat.

It's exciting to hear that Disney is planning so far into the future with this property. Between this and Marvel, I think this is a nice trend. Although it's hard to imagine that there are too many 'evergreen' universes out there to do this with, I think it's smart of Disney to lay out the money for this kind of investment.

P.S. - what a cute picture with this article!

"You mean we might be getting the original versions of the original series soon? Yay! I'd buy that in a heartbeat. "


Where did he say that? I think you're reading too much between the lines.