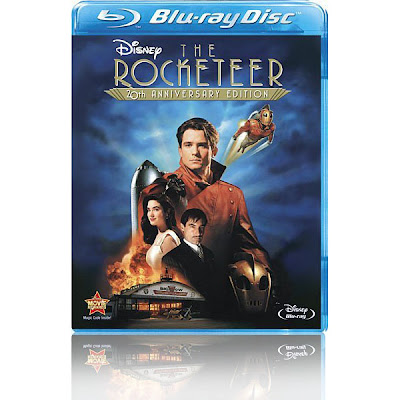 So September begins and the Mouse announces holiday gifts...

After much anticipation about when they would finally release a Blu-Ray of the classic film, "The Rocketeer" would be announced, the details are out.

That's when you can get your copy of the film. Who knows, if enough people buy it we might even see the Suits in Burbank think of a sequel, reboot or even an animated series on Disney XD?

I sat my kids down to watch this movie the other day when it showed up on SyFy channel. They loved it! Still stands up.

Oh boy! I don't have a Blu-Ray player so I hope they release a regular version, too.

When I was a kid, I loved this movie. Even now, all grown up and as a pilot, I love this movie.

Meh. Like Captain America and virtually every one of Joe Johnston's films, it starts out great, and peters out halfway through due to lack of strong characters. He's a low rent Chris Columbus.

I have the dvd version, which is such low resolution that I get a nice thick black border all the way around the picture on my screen. Here's hoping they do the blu-ray right!