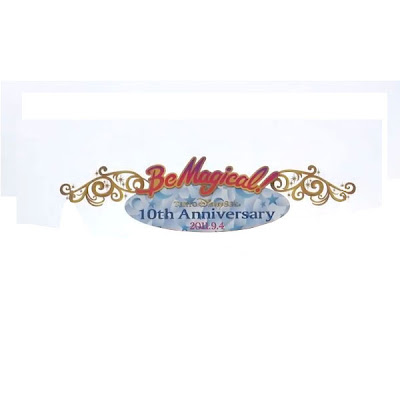 There were so many events and ceremonies celebrating the anniversary of Tokyo's Second Gate...

No way we could cover them all, but I thought it would be nice to look at a few of them. If you can't be there, at least YouTube can take you there.

Here is the opening ceremony to commemorate the tenth year of the park with the heads of the Oriental Land Company and Walt Disney Company head of parks, Tom Staggs (Take a look around Tom, this is what we expect!).

The musical celebration on the water in the Mediterranean Harbor yesterday. Again, nothing is as good as actually being there with the sights and sounds, but you can get some of the flavor of what it is to see this magical place at this magical time.

Before everything begins, custodial has to be make sure everything is up to the high standards of a Disney Park, but take a look at how much the Japanese Cast Members get into their jobs.

Some of the bizarre musical renditions (with Chip & Dale) you can find at Port Discovery during this time.

And speaking of music. Here's the official song of the 10th anniversary. Now, can you imagine if Disney California Adventure had an anniversary song?

And here are some of the decorations outside the entrance to the park.

If only the tenth of DCA could have been celebrated in such a tradition. We do have another one coming up in five years so perhaps they can take some tips from these celebrations and make it a memorable one. By then the Second Phase will be done if everything works out smoothly, or at the very least will be deeply in development.

And one can only imagine what will be up in Tokyo's Second Park by then...
Posted by Honor Hunter at 8:06 AM

Love their custodial always.
I was lucky to be there opening day of tower of terror 5 years ago, and in those 5 years, they haven't really done too much since, Jasmine’s Flying Carpets and Fantasmic. I wish every 5 years the resorts would get a D or E Ticket. No one can compare to Disneyland Resort (DLP & DCA), Tower of Terror, then 4 years later Midway Mania, then 4 years later Little Mermaid/Star Tours. I wonder if we'll get an expansion of DLP in 4 years for the 60th

Buena Vista Street in Disneyland should DEFINITELY get a great opening ceremony. It looks like it'll be fantastic. And what about the Fantasyland Expansion in WDW? That should DEFINITELY get a lavish christening celebration of some sort. Let's hope the suits will see that spending a little extra cash will generate great press, great memories, and greater attendance. We'll see.