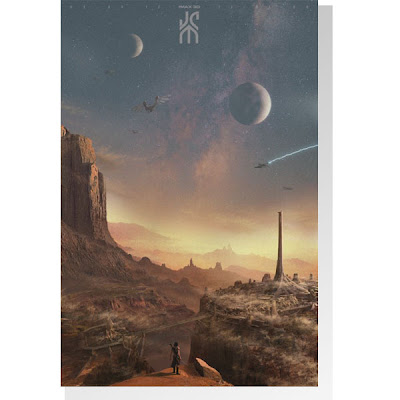 It's very fascinating that Walt Disney Pictures would pony up 200+ million for this film and then not figure a way to sell it to the public...
Posted by Honor Hunter at 7:50 AM

One of the oddest promotional campaigns for a big-budget film tat I've ever seen. Its as if the studio simply gave up and said, "WTF." I wish I had $200 million to burn.

When I saw the trailer you mentioned above a few days ago, my first thought was: Finally a decent trailer! Then I realised it was made by a fan... That says enough, doesn´t it? The fan says on youtube that it was made in the spirit of "we want to help" -and that is what it really does! What on earth (or mars) has happened to Disney´s marketing division? Bolt, Tangled, now this - I just don´t get it...

I saw the movie last night...loved it!

Now I'm interested in this movie. The official trailers have basically sucked. This one actually explains ALOT!!

The teaser came out and was just that a teaser. Then the trailer came out and I thought, this should give the lay person an idea of the movie and was worse than the teaser. I held out hope that a final trailer would come out to save this pic and when it did, a fan was the one who rose to the occasion not the studio.

Is this someone's plan to try and knock Pixar (or principles from Pixar) down a notch? John Lasseter should have exerted his influence and helped out Andrew but it's almost too late. I don't know what can be done to save this movie besides word of mouth but that can only do so much and many people have made up their minds already.

We said the EXACT same things about "Tangled"....

"Tangled" was easier to promote because princesses are synonymous to the Disney brand. When a movie has an ability to attract children, parents are going to devour their hunger at all costs.

"John Carter" is absolutely gaining little traction, and most of my friends have no idea what the heck this movie is all about, the trailers and commercials are very vague. For the most part, Disney has been having difficulty attracting mainstream audiences to their male-centric films ("Prince of Persia", "The Sorcerer's Apprentice", and to some extent "Tron Legacy"), it just seems like the studio just gave up and is simply blaming this film as a Dick Cook production, isn't this the final one he greenlit?

Since Pixar is synonymous with quality, I do wonder if there would have been more interest if the film was branded as the first live-action Pixar film.

I hope I'm wrong though, I've been waiting for this film for a very long time

That poster is hideous, with no focus, no clarity, and ZERO central idea. It's poorly painted, and looks like an ad for feminine hygiene products. It's also highly un-original.

The previous ads were awful, but they were far better.

The movie? Saw it. It just lays there, so no amount of ad work could help it much.

Rich Ross is making lots of mistakes. This is just one of them.

Check this re-edited trailer by fans:
http://www.youtube.com/watch?feature=player_embedded&v=-BxeHQY1NuM
Disney should pay attention, and get rid of their hip marketing dept.

This is the LA Times story with the re-cut trailer.

Disney couldn't sell the Muppet movie either, except to try to make people feel sorry for them. "Oh, everyone's forgotten about us, boo hoo." What an embarrassment. Damn odd way to sell a film. Didn't work either; the movie's still not in the black and Disney's won't even open it in France (odd, since some scenes in the movie are set in France).

I have been extremely surprised that nowhere in the film's official campaign is it noted that it is from Edgar Rice Burroughs' classic novel, the man who created Tarzan...just really, really ridiculous marketing by people who honestly should know better.

"That poster is hideous, with no focus, no clarity, and ZERO central idea. It's poorly painted, and looks like an ad for feminine hygiene products. It's also highly un-original."

"The previous ads were awful, but they were far better."

"The movie? Saw it. It just lays there, so no amount of ad work could help it much."

Stupid Troll. Or at the very least, one without taste. I saw the film and it doesn't just lay there. This anonymous likely never saw it, because everyone that saw it with me was totally happy, and a few were somewhat stunned at how good it was. Haters will hate and trolls will troll.

Go see the film for yourself. It's a fun ride.

"Check this re-edited trailer by fans:"

Was not by fans. Disney made it and attempted to pawn it off as fan made.

And yes, the film really is terrible. And yes, I did see it. It's a shit fest, and is no better than a run of the mill SyFy movie of the week.

Yes, it was made by fans. I've seen the trailer and know the people that did it.

And yes, you're a troll.

I too have seen the film and it is a great adventure, so I think you're full of what your spewing.

I felt the same way about the marketing, but then I saw the film last week. What a terrible disappointment. I kind of felt sorry for the marketing people after I left the screening.

Saw the Film on 3-9, very disappointed. It would appear that Mr Stanton was afflicted with what I would call "Lucas-itis" which renders everyone around the afflicted incapable of saying "no" to anything the director wants. I am familiar with the source material and I had to explain many things to my partner who was not. The story needed tightening thats for sure.

My last thought was "Why didn't they just do this as animation?"

Do you think that we, as a collective audience, were more innocent, so to speak, and more willing to suspend disbelief in the "old" days of Mary Poppins, and perhaps that's why the flying in that movie looks better to you than the CGI flying that we all have so much exposure to and know every minute detail of how it's done? Surely that must take some of the "Magic" out of the Silver Screen experience...

No surprise at all, and, who even cares... it's Disney. All the drones at Disney live with their heads forever in the sand. The mutual admiration society known as Disney is so "dizzy" over believing how wonderful they are that they are totally blind to reality. The "peter principal" has never been more prevalant in human history that the personification of it within the "globalistic" mindset of the brainwashed Disney family of fraudsters. Disney is not about excellence or creativity or anything noble, Disney is all about cash, your cash becoming their cash, that's it. Why does any one expect any name tag wearing human sucking up to an imaginary mouse to have any forsight, insight or even hindsight at all?