The "Field Of Dreams" Principle... 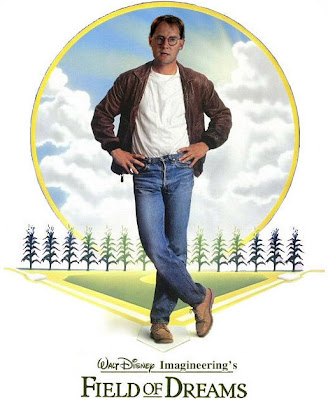 "If you build it, they will come."

That famous quote from the movie "Field of Dreams" is a very powerful statement. Not only in the film, but in theoretical, Imagineering terms. These are lessons learned from the failures of the 90's. The new management Suits over at Team Disney have learned from the mistakes(we hope, we pray) of building parks too small or too unthemed.

Think we would have been having all these discussions right now about how to fix DCA if they would have done it right in the first place? Probably not. And this is not just another ranting against Eisner and his crew, although they deserve the scorn that has been heaped upon them. I like many others would have liked to have seen WestCot built where California Adventure stands and I would have loved for Port Disney, with its Disneysea to have been built in Long Beach. I also feel that While Eisner was wrong to go the skimpy route and build a park on the cheap, if he had built a park with the detail and cost of Tokyo DisneySea the company would have had a horrible time recovering from that expenditure after 911. It would have been worse, much worse than Euro Disneyland. So, that being said, it still would have been possible to have created a great park from the start. One with a more unifying theme and more detail to satisfy the discriminating Californian park goers. No, this post is not hear to rain on poor Michael Eisner's stinginess during the second have of his career at the Mouse... This post is simply put, an article that states "if you build a great ride... the lines will follow and the guest will spend more time at the resort, buying more souvenirs, more food(after-all, they have to eat something while waiting in a five hour line, right?) and more nights in the hotel rooms". In shorter terms, more money for the Mouse. And that's what it all boils down to my friends and fellow Disney Geeks. You would thing that something so simple would be clear to see. Wouldn't you?

You would be wrong.

Ever been to Disneyland in Anaheim? Have you ever traveled down to Critter Country and stood in that long line for "The Many Adventures of Winnie the Pooh" ride? No? Me neither. That's because there isn't one... there's rarely a long wait to get onto this ride, even during busy times like summer or Christmas. If you have waited longer than thirty minutes for this ride, it's because you let others cut in front of you. This ride opened to luke-warm reviews at best. And sadly, it opened up after the ride in Tokyo. If it had opened up before, then we could explain the design of "Pooh's Hunny Hunt" as an improvement over the original. Instead we are stuck with a de-evolution of the ride, one where it's taken down to its most basic concept and everything about it that is unique or dynamic is washed away. It's plain to see that we didn't get a basic variant of the deluxe version in Tokyo, we got treated like any new ride is to be thankful for. Which is definitely not true as it would have been better to have kept the Country Bears than suffer through the mediocrity that took its place. Some people will like the ride. Some guest will ride it and find it's great to see the characters come to life. None of those people have every seen, much less ridden on Hunny Hut... after doing so, it's hard to feel we didn't get the shaft on this one.

There are other stories like this. Other attractions with the same outcome, almost all of them from the late 90's on... Frank Wells, sigh... where oh, where are you? This wouldn't have happened were he there to temper Eisner's ego, but alas. Is there no one who understands the need to build rides and attractions that draw you in and keep you there, demanding more of your attention and more of your money, naturally. No one?

Of course, now there is. The Mousestro does. And to a slightly less of a degree, so does Iger, but he's got his mind rapped around ten times as many decisions to make as John does, so we're going to leave him alone for right now.

Now, we all know the story of what happened when Lasseter came over to WDI during one of his early meetings and we remember the much paraphrased statement he made: "We won't be making any mediocre rides, anymore." I've talked to people that heard him, and it may not be the exact words, but it is the heart of them. Just like the approach John takes at Pixar, he's trying to instill those values in Walt Disney Animation AND Walt Disney Imagineering. Quality is what they plan on selling... because quality is what differentiates Disney from Universal, Six Flaggs and Knotts. Not that those parks don't have some nice rides and even good theming, but it's like comparing Tiger Woods and another player that is competitive in the world of the PGA. It's not the same. Disney makes parks, rides and shows like no other. And when they mess up, we notice. When they only try half-heartily, we notice. DCA being the primary case. I won't mention WDS Paris, because this isn't a case of them trying... it's a case of falling on your face. DCA is like Disneyland compared to that park. So what John Lasseter and his circle of confidants intend on doing is creating attractions that don't ask you to come see them... they demand it. I know it's hard to grasp this because it takes so long to design, build and implement these things, but let's just say that the halls of WDI in Glendale are alive with creativity again. People that used to go in and do the daily grind, who didn't agree with the direction the company was going, didn't believe in the crop of projects the Imagineers had undertaking... well, that creative fire had been stoked, in some cases re-lit, in some cases redirected. It's going to be a while before you see concrete proof of this plan. Let's just say that in about two year you'll finally start getting a glimpse of it in America and around the World. By the time Phase One is done for our Second Gate here in California, you'll see what I'm talking about. And I'm not just talking about DCA. Come the turn of the next decade you'll notice some interesting things overseas and maybe even in the middle of Florida.

Lasseter and the band of brothers he's gathering around him in Glendale realize that it is as simple as the whisper that Ray Kinsella heard coming from his corn field...

If you build it, they will come.

Well, when it comes to the guys in charge over in the Glendale Kingdom right now...

They shall and they will.
Posted by Honor Hunter at 8:08 AM

Nice post there. Now, if only they'd address the "Pooh Problem" as well.

The sad thing about Pooh at DL is that you don't even have to compare it to the Tokyo version. Compare it to WDW. If they had only dropped in an exact copy of the WDW ride (i.e. almost no development cost other than siting), they'd have been better off.

Whoa. I just looked at the video of the YouTube that Honor linked. That ride is wicked! Why didn't they build that at Disneyland? It would have packed them in by the thousands daily. That would be my favorite ride if it were in Anaheim. Maybe an upgrade in the future?

DL's Pooh ride should've been built in Fantasyland. They could've demolished the long-dormant Fantasyland Skyway station and built it there.

Normally, I'm quite open to change, but this is one move that I still refuse to forgive them for.

If they were going to replace Bears with an attraction like Pooh's Hunny Hunt I wouldn't mind, but the inferior ride they gave us doesn't do the space it takes up justice. Maybe a refurb that brings the ride closer to TDL's version can make it more palitable?

Please start proof reading your posts. Your attempt at a dramatic narrative is weak when it's rife with typos.

Go ride the one in Tokyo and tell me you don't think we got screwed, anonymous. Also, perhaps you should go back and look at the reviews papers like the LA Times gave the attraction. It sucks. Sorry that you're willing to be an apologist for anything with the Disney name on it.

Winnie the pooh at disneyland is like bad acid trip. it is poorly executed, boring, and cheap. The ride vehicles are cramped. winnie the pooh is like taking one of the very first dark rides stripping it of technology and making it crap. it has less tech than a store window. happy birthday pooh!

Hey Honor. I really love all of your posts. I was just wondering when you will get another Blue Sky Alert for WDW in> Last time you posted one was all the way back during the summer, and tons has happened since then.

do you have any updates on ST 2.0 or whats going on with Disney's Hollywood Studios? Or what's to be of HISTA/the Imagination Pavilion over at EPCOT? Or if the rumors are true that WDI is looking to create an E-Ticket in the World Showcase (specifically Japan)? Or if AK's nighttime show is coming soon? etc...

I really love your updates, and the news has been really dry for WDW these past couple months. There have been no new announcements in quite a while.

Is that John Lasseter in that photo? Now that's funny.

I agree that the American version of the Pooh ride is a disgrace. An insult to American Disney fans. I was unimpressed with the one at WDW, but when I saw that video of the one in Tokyo, I was TICKED. How dare Eisner cheap up a ride, stick it in the parks and expect people to applaud it just because it's connected with a profitable franchise character. Gad, I'm glad Eisner's gone. Now if Iger could just sell off the dopey stuff Mike bought, like the Power Rangers and the Muppets, I could really start to feel that Disney is finally Disney again...

To the above Anonymous...

There is NOTHING dopey about the Muppets, Power Rangers, etc. at all! Not...a...thing.

And Disney is not going to sell them off anytime in the future. They're too popular and profitable for the company.