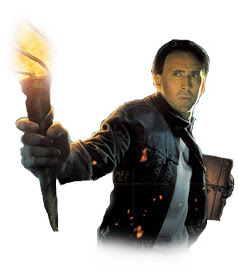 Before it's even released, "National Treasure: Book of Secrets" has already got Nicolas Cage excited about doing more sequel. He tells Coming Soon that "With 'National Treasure,' I believe that it should become more and more 'International Treasure'. I was very happy to see that we went to London, England and Paris, France, but I'd like to see the movie go wider still" He elaborated on that" "I'd like to go into Africa, Egypt, Asia, and keep going. My hope is that Ben is recruited and he gets a dossier from these other countries about their history, and has to download it and learn it, and then try to go on these hunts on their behalf. That would be a lot of fun for me."

The first movie was a bit of a surprise for the Mouse. Although they thought it would do decent numbers, the Suits were initially surprised that the film got a PG rating. The plan had been to release it through the Touchstone label until that happened. Once that happened, the Suits made the decision to move it over to the Walt Disney Pictures label. It worked far beyond their expectations with a box office return that padded the coffers of the Disney Vault to the tune of $173 million domestic, $174 million international and a global total of $347 million. Not bad...

And a sequel was obvious. Is it good? Well, we'll find out in a few weeks. I know quite a few Disney Geeks that will attend this film just because of the short that's attached to it. That could help boost its box office, but not enough to make it a success... that will depend on how many theater goers feel it's worth seeing again and again...

That'll also determine if Nicolas Cage gets to fulfill that quote about wanting to make more sequels. Come December 21st, we get to determine ourselves if Benjamin Franklin Gates goes on more adventures.
Posted by Honor Hunter at 5:32 AM

I'm looking forward to the film as well as the Goofy short. :)

I really enjoyed the first movie. I could see it as a great E-ticket ride too! I hope that the imagineers can too!

I didn't see it until DVD, but I really enjoyed. A pretty smart tale.

I am excited about the short, too!

I saw this blog and thought I'd mention that ipledge.com is getting rid of all its Disney Merchandise.

I work on their website, and I've noticed that they've got stuff like tote bags, pins, postcards and mugs going for really really cheap. If you're a collector, or just a fan of Disney, you might want to check it out.