How To Make A Movie Out Of A Theme Park Attraction... 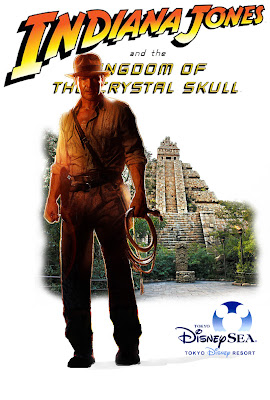 USA Today is out with some more of the plot to the new Indiana Jones film and it sounds more and more like the movie will follow closely the attraction at Tokyo DisneySEA. How so?

Producer Frank Marshall has confirmed, according to the article:

The story is about a quest for South American relics with supernatural powers. Sounds like it could be placed in the Lost River Delta of TDS, doesn't it?

The artifact of the title is inspired by real quartz sculptures of disputed origins that are carved in a way that defies the natural structure of the crystal.

Marshall says: "The theory is they are shaped by higher powers or alien powers or came from another world, or an ancient Mayan civilization had the powers"

Mayan, huh? Kinda like that Ziggurat building that the attraction is within in Tokyo... the tie-ins are going to be very interesting. I have a feeling the executives at OLC are a bit giddy right now.

Wanna read the article? Have a look for yourself.
Posted by Honor Hunter at 5:46 AM

I am happy to see that everyone or so finally agree that there could be a link between this Indy 4 and the TDS indiana jones adventure version.
In my august 15 article on my blog "Why Indiana Jones and the Kingdom of the Crystal Skull could very well be the title of the Indy 4 movie " - and at a time where no one seems to believe that this could be the title and why, i was explaining why it surely was going to be the final choice.