Largest Entertainment Company In The World? 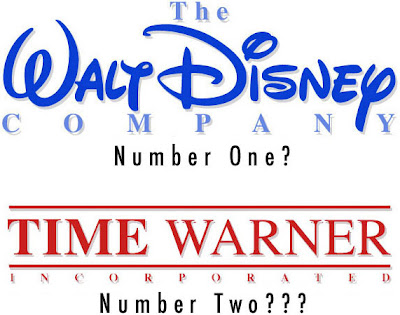 There is speculation that Jeffrey Bewkes, who is about to take over as CEO of Time Warner Inc. next week, will break the company up and sell off its publishing assets(Time, Sports Illustrated, ect.).

That would leave Warner with the film studio, cable-TV networks and a few other interest making its size look like that of rival, Viacom(owner of Paramount).

It would become the top of the heap without really having to grow more than what it already is. This would be mainly a feather in the cap of perception, really. No change would happen at the Mouse other than adding the line about being number one in the annual report. Something that Iger can quote in his speeches and lay claim to as CEO of the Walt Disney Company...

Y'know, about being the largest entertainment company... IN THE WORLD! Sorry, I couldn't resist.
Posted by Honor Hunter at 6:02 AM

TIME WARNER without TIME Magazine? Seems like an odd decision.

Time Warner is what the company became known as. It would be Time as its own company and Warner as its own company. I wonder what this holds for DC Comics? I would doubt they would get rid of all those characters.

Any thoughts about Disney scooping up any of the entrails from Time-Warner?

Doubtful. I don't think they plan on spinning them off just to get swallowed up by a competitor. If it happens, Warner and Time will likely co-exist as seperate entities.