When you wish upon a nation with over a billion people... 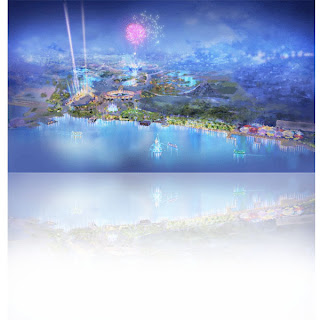 So Tom Staggs gave us a peek at what Shanghai Disneyland will look like yesterday...

At a Walt Disney Company Investor's Conference yesterday, he released the first piece official artwork of the next Magic Kingdom styled park/resort. And the Net seems to be abuzz about it. Disney and More has a post talking about something Alain and I have had conversations about over the past few months.

But as you see in the artwork, it's very hard to make out details. Mainly that is by design. Disney has been burned before by cheap knockoffs of things that cost great resources to design and create. So when they make that official announcement during the groundbreaking in a few months, don't expect to see a great deal of detail. The Mouse doesn't want to release a lot of artwork to only have it have a carbon copy out before their park even opens.

Now back to that park. It certainly looks like a beautiful and unusual place, doesn't it? And that castle in the background doesn't look like any we've seen before. As well, as that, there is an extremely large amount of water around and within the park. And there's a large mountain over to the right that could be an Expedition Everest, re envisioned Matterhorn or as Alain says, a version of that elaborate Pirates of the Caribbean that Hong Kong Disneyland was supposed to get. Perhaps even some of the attractions from Tokyo DisneySEA will make it over in some form.

I know a lot of people bemoan Disney Suits for not thinking out of the box and continually copying the original style that Walt created, so in this instance you might get your way with a park that looks nothing like what you expect when you go into something called Disneyland.

Did you read Stagg's speech where he openly admitted that they missed the mark on DCA? That gives me more hope that he will learn from past mistakes.

I am excited to learn more about the new park.

I think the mountain is Villain Mountain. It is rumored as one the new things for the park.

If the castle has got water directly in front of it, might we expect something similar to the current incarnation of the Walt Disney Pictures intro???

There looks like flume coming off that mountain... I am guessing pirates... They'll be hoping the forthcoming films will still have (sea)legs in China too.

Screamscape reports on rumors that the mountain may be a revamped Pirates of the Caribbean that will be based on the movies rather than the classic attraction.

The problem that I have with suits is the complete lack of creative resolve and/or constuctive objectivity. Suits are usually arrogant corporate lapdogs that have the audacity to not only think that they are creative (when all they do is brown-nose board members), but to treat others like they are not creative at all.

This guy is a hold-over from the Eisner error... excuse me... era. So as far as I'm concerned, he has a LONG way to go to prove himself and show that he has any creative sensibilities, or even any common sense.

to shanghai: to take (someone) against his will for compulsory service -- sorry, but "Shanghai Disneyland" will always sound very strange to my ears...

Where exactly am I expected to see a castle on that picture ??? ...

Is this eventually a concept art instance for Disney Shanghai, or is this a totally random other park, that will or will not been build "somewhere" on earth !? Now, I am ready to believe this is actually coming from Disney (that on itself is not important), but it doesn't reveil anything that realistically refers to the assigned plot of land in Shanghai.

The ONLY thing we know for sure, is that actually, people are being removed from their ancestors plots of (farm)land, by the kind of dictatorial forces that are still the everyday's practice in China, now SUPPORTED fiercely by the capitalist monopolist-moneymaker "Disney". They are actually sharing a crime against humanity. Disney made many mistakes in the past, but this time they make the mistake of supporting DEPORTATIONS. How can that place EVER be a "happy" place on earth, if we are concious about HOW it happens?
Any theme park enthousiast around, that still has normal levels of MORAL BEHAVIOUR ?
Anyway, Shanghai citizens, themselves, DO have concerns about what is happening.

(Now see if I am correct. This comment could be cencurised, but it will be placed on another web-spot at the same time, with referral to this site.)