The World Of Tomorrow (Films)...

It's amazing, it's astouning, it's the world of tomorrowland... 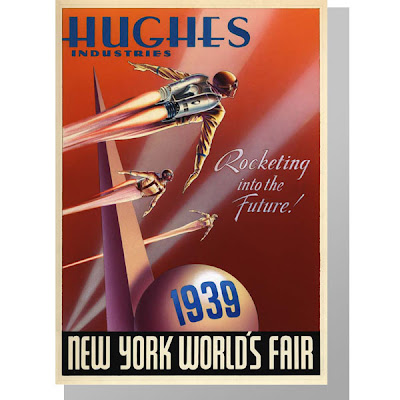 Time passes so quickly that you tend to lose perspective of what has happened...

Or what could happen. The middle of the decade is only about three and a half years away. I thought it would be interesting to take a look at where the Mouse will likely be then.

When we get to 2015 you have to wonder where the Walt Disney Company will be. What will the film business be like? The theme parks division? How will the events and advances in technologies change or advance the Burbank entertainment company? In this post, I thought we'd look at the film division.

The live action family division of the Mouse at the middle of the decade will have released "John Carter," "20,000 Leagues Under the Sea," probably "Pirates of the Caribbean 5" and various others. A "TR3N" will likely have been released if the reception to "Tron: Uprising" meets the Suits approval. And should many of those films be successful, then you can imagine sequels to several of them would be on the way. Another John Carter would be close to production or already being filmed based on how much box office receipts came in in 2012. A sixth, and likely final Pirate film starring Johnny Depp would undoubtedly be in the making as well. The likelihood of Rich Ross still being in charge will depend on the success of many of these films as well as several comedies recently approved. Should we get more stinkers like what has come out with over the past year, another head of the studios could be in charge by the middle of the decade. Success in this business has a way of leveling out and rolling heads.

The heart and soul of the company will look dramatically different come a few years. The output of films will have been of a consistently better quality for the good part of a decade by then (Pixar bought in 2006, "Bolt" two years later). With Lasseter making sure stories count more than bean counter opinions, audiences will hopefully have started to regain faith in the brand by then. Also the variety of films will have broadened. While princesses and queens and kings will still be present, stories that you wouldn't normally think of coming from Disney will have come or be soon coming from Disney. By 2015, you can expect "Wreck It Ralph," "King of the Elves," and likely "Snow Queen" to be out come the middle of decade. But the most interesting ones are yet to come from the trailers of what Dean Wellins and Don Hall have planned. By this time WDAS will have likely rebuilt a reputation that war torn down over the late 90's/early 2000's.

Up north in Emeryville, Disney North will be passed all the announced films that we know will continue through 2013. Next year is "Brave" which presents a princess tale from the Lamp's point of view. Afterwards, "Monster University" will roll into theater the following year. 2014 and 2015 have yet to be announced, but one of those films is likely to be by Pete Docter, and there are four or five other projects that are in various states of active development up there and anyone of them could be moved on the production slate. It all depends on which ones Lasseter believes are ready to move into production. I would expect an expansion of the slate of films from Emeryville to be announced within the next year or so. We're about due for another list.

Disney's latest sibling has a much fuller and more open slate over the next few years. Now, this is a list of films the studio is producing itself, not the characters that have been licensed to other studios. But by 2015 expect to see "Avengers," "Iron Man 3," "Thor 2," "Ant Man," "Captain America 2," and possibly a "Runaways," film, a "Doctor Strange," film and a "S.H.I.E.L.D." film. This isn't even counting several other projects that are gestating like "Iron Fist" and others that the comic book powerhouse are planning for the silver screen.

Over at the adult live-action division, which has basically become a distribution house for Steven Spielberg, will have just had the five year/thirty picture deal expire the year before. Should DreamWorks and Disney seem to be enjoying the marriage at this time, you could expect a similar five year plan to be announced. Films like "Lincoln," "Robopocalypse" and several others will have been released within this time frame. That would mark a decade worth of relationships with Spielberg and his company. Hopefully, some of his talent will be used in other areas of the company throughout these coming years.

It's going to be interesting to see where it after the the middle of this decade...

Great article Honor. It's been a whole since you've talked about th future for the Parks, would love to see an article soon!

Hmmm, I dunno about Marvel having its own separate branch within the studio. It's still an unknown quantity. I think audiences are pretty sick of superhero movies. Captain America is an underperformer. And why would anyone want yet another version of Hulk?

I notice you didn't mention any future Muppets features. Good call. Word is the current one is a dud.

Well, I wonder when the announced "Magic Kingdom"-movie, starring the Mouse himself, will come out; no recent news about that project?
By the way, it would be very interesting to read an article about this whole planned "Let's rebuild Mickey Mouse as Disney's main character"-thing, that was started with 'Mickey Epic' ...

Anyway -
thanks for the wonderful blog

I always believed Disney's studio strategy is flawed. As indicated in the following article, I think they need to diversify their portfolio like Warner Bros. and Twentieth Century Fox - more singles, doubles along with big franchises. Maybe 5 or 6 Disney titles with lower, middle and large budgets. In addition to the Dreamworks titles, they need to produce their own Touchstone titles to compete with the other majors and attract top talent - maybe five or six titles with a wide range of budgets. Also, they should not have sold Miramax. Though it doesn't fit the "Disney" brand, that library earned 100 million a year. Never sell off your library. Marvel and Pixar are good. It's the Disney/Touchstone studio that needs to be reworked.

I predict Rich Ross and Co. will be replaced if things don't turn around by next year. Still not convinced Bob Iger understand motion pictures.

What does Bob Iger understand??

Lars, I couldn't agree more with your comments about rebuilding Mickey as Disney's main character. It sucks that he's just the company logo, and that Iger would rather buy characters created by other companies than try to revive the character that started it all.

I hadn't heard that "Magic Kingdom" was going to star Mickey. If so, I hope we see him in his vintage mode a la Epic Mickey (which would also make a great movie). Hunter, have you heard anything about such projects? Thanks!

Is it true that SQ is dead again?

Thank you Honor for this post.
Could you tell me something about the new movie directed by Ron Clements and John Musker? I read on the web that it could be a new musical based on a fairy tale movie... I read rumors about this and people on the web are talking about Turandot, Cupid and Psyche or DonkeySkin... is it true or not?

Honor - you mention 20K Leagues, which is in no way confirmed or even close to production, but you fail to mention Lone Ranger, or Oz, or the Order of the Seven, or Magic Kingdom, or the Reese Witherspoon comedy, or the recently announced Henry Selick movie, or even Haunted Mansion.

Interesting outline regarding the film slate. I do question if we're getting too much Marvel movies now, feels like over-saturation. You should do a television edition.. Any word on future cable acquisitions, especially some sort of channel to craft dark Marvel properties? Will The Muppets ever return to television? With the resurgence of Walt Disney Television Animation, will Mickey Mouse get his own television show that's not dumbed down? Will ABC Family get a name change?

You failed to mention Lone Ranger, or did you know something we didn't, Honor?

Get Bruckheimer out of Disney! said...