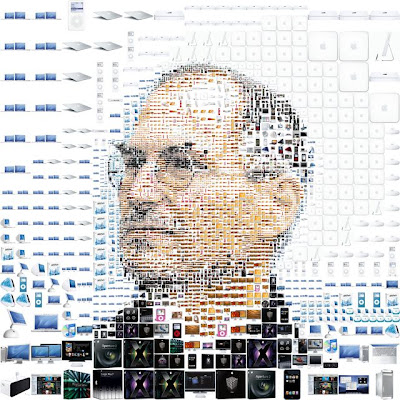 A lot of people have lost jobs, but now a Jobs has quit his...

Steven P. Jobs has resigned as CEO of Apple, Inc. as of today. This is like hearing something equivalent to Walt Disney resigning from Walt Disney Productions. It truly is the end of an era. Like when Walt passed away and the Disney Studios had to find there way without him, or Henry Ford no longer being at Ford Motor. It's one of those points in history that you can point to and say that you were there, or you remembered what you were doing at that time.

It won't likely mean anything for his involvement in the Walt Disney Company. They don't meet that often and he will likely stay on the Board of Directors, as his seven percent of the company still makes him an important contributor to business discussions. My warmest feelings and deepest regards go out to him, his family and the people who work there. He will now be the Chairman of the Board, but he won't be around One Infinite Loop on a continuing basis or regular schedule.

While his shadow will loom long and far over the company, his fingerprint will remain there forever...

So you're saying Jobs is anti-semitic? By labeling him with noted right wing Jew haters like Ford and Disney is there something you know that we don't, Mr. Hunter?

I just wanted you guys to see some of the types of e-mails that I have to sift through.

Sometimes I just shake my head...

Another mush-brained, 20-something nutjob who read some books in college and believed everything in them, without vetting the journalistic scholarship.

Comments on the internet are much like the bathroom wall of a public restroom. Expect the worst.

I wish him well in his health. He'll still be there as Chairman which means he'll still have an influence over design and direction. It might be a blessing with him not having to handle the day to day workings of such a large company. But it is a historic moment for everyone to take note of. You'll tell people about this day sometime in the future to friends and family that weren't around.

Hunter, a good post. I agree with you that it is a sad day. I just hope they'll be able to stay on the course that Jobs has charted over the recent years.

why is he resigning all of a sudden?? makes me wonder if something fishy is going on....

Unfortunately, this probably means that Steve may not be with us much longer. Very sad.

Keep thinking positively and keep praying hard for him to make a healthy recovery and return to Apple! Do that, instead of thinking downward, and everything will be okay!