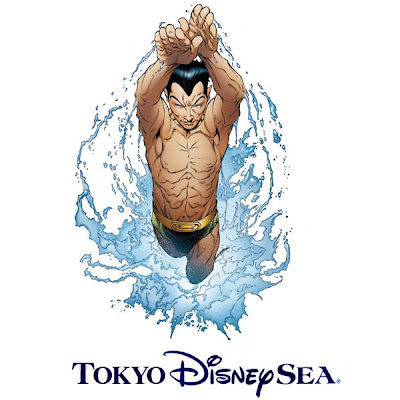 Atlantis is coming to Tokyo DisneySEA...

No, not the one from the Disney animated film, but the one from Marvel Comics. The one ruled by Namor. If fact, at the Walt Disney Parks and Resorts press conference this morning that was co hosted by WDP&R Chairman Tom Staggs and Toshio Kagami - Chairman and CEO of the OLC, he made a guest appearance. Well, at least an actor portraying him did.

Come 2015, Tokyo's Second Gate will have an eigth port: "Marvel's Atlantis." The area will be located next to the Lost River Delta port and will comprise at least three attractions, restaurants and shops featuring Marvel merchandise. Details about exactly what those rides will be is limited as WDI plans out the designs over the next year and a half. But from what we know of the Oriental Land Company, it'll be a very elaborate expansion.

So we now know where Disney's first expansion of its Marvel properties will go. Now when will we find out about where/when they'll be in Anaheim and Orlando? Soon, from what I hear.

But until then, just imagine what it'll be like traveling to Namor's kingdom in Japan...
Posted by Honor Hunter at 7:15 AM

Happy April 1 to you too.

Nooooooooo! This had better not be true. Ruining the best Disney park with such a cheap marketing gimmick is the worst thing to do. I hate you Iger.

Here you go, oh uninformed one!

Louie, I think this is the start of a beautiful friendship...between Marvel and Disney. Who knows what this will lead to? I'm waiting for that solely Marvel park they talked about for Korea I think.

Maybe this whàt they're thinking of replacing autopia with in Anaheim?

This better be April Fools. Crappy Marvel characters infesting a Disney park? PUKE! And just when they'd gotten rid of the Power Rangers (bet you cried your eyes out over that, eh, Hunter?)

Can't stand Power Rangers. Marvel characters will be ok in Disney Parks, DEPENDING on where they are put.

As for this being an AF Joke? Check the date.

viagem internacional orlando said...
This comment has been removed by a blog administrator.
April 4, 2012 at 1:35 PM