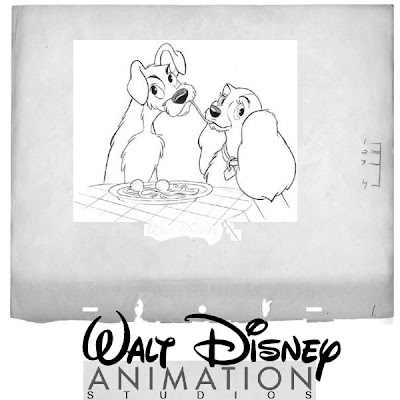 It's amazing what a couple of years and a blockbuster can do to a studio...

The Hat Building is flying on all cylinders and things are a buzzing. But not everything is going well in the Happiest Studio in Burbank.

Later this year, "Wreck-It Ralph" will debut and show audiences that "Tangled" wasn't a fluke. From the stories I've gotten, it sounds like they really have a heart filled tale that will have everyone seeing this film over and over again. What "Toy Story" did for toys, this does for video games. And the nostalgia for those that grew up on 8-bit games as well as those that love the 90's games are going to be in love with this film. And boys, will eat this up. Get that? "Boys," the marketing demo that the Suits seem to be worried about.

After that, next year we go back to classic fairy tales. Minus the names that tell you they're royalty, of course. But one tale that won't be happening anytime soon is about Elves. That's right, "King of the Elves" was racing with "Frozen" to be the 2013 release and it still has too many story structure problems to make it across the finish line. So many in fact, that Chris Williams is now off the project and going back to work on other projects (not as a director, but story boarder). It seems the script for Snow Queen aka: "Frozen" is in much better shape and it got the release date for next year, while KOTE got put on the shelve. Again.

Ron & John's new project is going through story development and could wind up being the 2014/15 slot, but it's still deep in the early stage so time will tell what happens. A lot of people have commented that this will be the duo's first computer animated film. As of now, there are development test going on for traditional, hybrid and computer examples, and no decision has been made. This decision won't be made for quite a while. Just like Pixar, the focus is on story, story, story. Not, the medium it's presented in.

The projects competing for 2014/2015 are the uber-secret film from Don Hall, which will be a marvelously unexpected project if it ever gets the green light, and Nathan Greno and Byron Howard's films which are deep in development. These are projects that are busy working out the story elements so that the films live up to John Lasseter's high Pixar standards. The one that gets the release slot will be the one whose story is deemed ready to actually animate. Not a bad concept, right?

There are a couple other projects in concept form and many more animators are lining up for pitch sessions with John for a chance to develop their ideas. Slowly the culture has changed over the past half-decade to the point where many animators and artist actually are having fun again. And many are hoping that they will be part of the Third Golden Age of Disney Animation. That is a very good thing.

Those of you that are fans of "Prep & Landing" will be interested in knowing that the ratings for last Christmas' "Naughty Versus Nice" special weren't where ABC/Disney wanted them to go, and any plans for a third special have been put into a holding pattern as the Suits figure out what/where or even when/if it should go forward. It's possible that the advertising schedule didn't exactly set the mark for giving people the information for when it would be broadcast. So Burbank is factoring in merchandise, ratings and other elements to see if there is any viability in creating another special. I certainly hope so, because there was talk of taking all of them and combining the into a film with original footage along the lines of "Winnie the Pooh."

And when talking about animation, if you follow WDAS then you know there was talk of moving down toward Glendale a while ago to be next to WDI. Those plans were canned and plans moved to trying to find a place on the lot to build a new animation building. Well, now the goal is to take the existing animation building and rework it, kind of the way Disney California Adventure had an extreme makeover done to it. And just like DCA was kept open as guests went about their way, so would be the same for artists in the Hat Building. It's nice to know that in addition to screwing up Disneyland's Second Gate, Eisner was capable of screwing up the animation building as well. But thankfully, it's all getting fixed.

But it's great to see the majority of news coming out of the Hat Building to be positive...
Posted by Honor Hunter at 11:48 PM

Nice metaphor, Honor. I think I know what you're hinting at.

I'm sure you didn't mean it this way... but it's really insulting to say that Disney artists are "...working out the story elements so that the films live up to John Lasseter's high Pixar Standards."

Disney Studios has the same high standards now that they are run by a man (John) who cares about film as an artform.

Greno and Howard are not working on the same film.

But I'm not sure what you're insulted about.

Dude, he never said they were:

"Nathan Greno and Byron Howard's films which are deep in development."

Films as in plural.

Finally, a descent article after all this time. Keep it up, Honor.

Greno and Howard are not working on the same film

They are not? Honor, is this true?

But they had announced they were working on a project together.

Do you know who's the new director(s) for "King of the Elves"?

Honor, do you know whether Alan Menken is attached to "Frozen" or whether Disney is getting someone else for this musical?

Honor, you didn't mention Deam Wellins' project. Is that still on?

"John Lasseter's high Pixar standards" - eh, those standards got kind of kicked in the drawers with his dreadful Cars 2.

Hope one of the upcoming projects has something to do with the Mickey Mouse movie that was rumored some time back. If that comes to pass and also involves Oswald, wild horses couldn't stop me from seeing it.

I loved the original "Prep and Landing", but the follow-ups have been very weak, primarily due to poor writing. Too bad; it looked like P & L could have been a good, original franchise for Disney (and god knows Disney needs to go back to DEVELOPING franchises, not just buying them!)

I read about a short titled "Paperman", a sort of hybrid of CGI and hand drawn animation. I hope "Frozen" will be like "Paperman" with a painterly look, I mean the painterly look Glen Keane wanted to do with his version of Rapunzel (a painterly look inspired by Fragonard, Rembrandt, Leonardo da Vinci). I think a movie with painterly look will be very interesting and original and I hope Frozen will be great!

Wonderful update. Thank you. Sounds like we have much to look forward to.

Nathan and Greno doing seperate projects? I thought they worked so well together on Tangled. This is a suprise.

Thanks for the update on WDAS Honor. I've been curious about what they've been up too recently. They seem to be more secretive then their neighbors over at the Lamp.

"I loved the original "Prep and Landing", but the follow-ups have been very weak, primarily due to poor writing."

I think the follow up was great, and very well written. I think both specials and the short are great works that WDAS should be proud of. And I hope they make more.

KOTE hasn't been shelved, if that's any consolation.

Yeah, get that 36% fresh on RT! High standards!

"And boys, will eat this up. Get that? "Boys," the marketing demo that the Suits seem to be worried about."

^ This sounds more like John Lasseter's true focus in movie making, certainly not

Cars 2 is proof that not everything that man touches turns to gold. And let's not forget that Lasseter, yes, John Lasseter, goes for buck as much as Eisner did. How so? Eisner killed off traditional animation because it was expensive and unprofitable. And what does does Lasseter do, even after claiming to be the savior of the 2D art form when being first appointed as creative head? He kills off traditional animation, resulting in the exodus of Glen Keane. Ron & John's new project is GOING to be CG, and everyone knows it. $$ speaks louder than creativity.

As for the follow-ups being "very well written" - Oh really? Then can *you* explain why "the ratings for last Christmas' "Naughty Versus Nice' special weren't where ABC/Disney wanted them to go"?

I was eager to see the "Secret Santa" mini-special, but was very disappointed in it - not funny, limp as a wet noodle. "Naughty Versus Nice" was worse, if anything. And it was all due to lousy scripting. What else can be blamed? The animation was fine, just like in the original. So what's YOUR theory?

Honor is correct about Chris leaving the project. He's busy boarding some other peoples project right now. Sad, I was looking forward to it. But there were too many notes and he wanted to do something else for a break.

Lassiter DOES like 2D animation. He is a big fan of Hayao Miyazaki's. I don't understand why Don Hall's project is top secret, unless they don't want another newt/Rio issue.

Every project in development is top secret until they have been formally announced. No information about Nathan's, Byron's, Dean's, or Ron and John's next movie has been released.

Honor, you are spot on with your teasing of Don's project. I just hope people realize that it is "in development" which means they are trying to make the story work. It's not yet been animated. But if John likes the take on it, then it could see the light of day.

^Which is one reason why buying Marvel was such a bone-headed move. Disney doesn't have access to the top - aka most popular - Marvel characters, just to the remaining also-rans who don't even merit their own comic books. Iger got lazy and penny-pinching and, just like Eisner, thought buying characters was the way to expand on the Disney appeal. WRONG!

Seriously, maybe it's time to start up another "Save Disney" campaign...

"Disney doesn't have access to the top - aka most popular - Marvel characters, just to the remaining also-rans who don't even merit their own comic books."

You clearly aren't a comic book fan. All these characters have their own books. And they're very popular, even more now that the films have been released.

"Iger got lazy and penny-pinching"

Four billion plus dollars is cheap to you? Wow.

"just like Eisner, thought buying characters was the way to expand on the Disney appeal"

Perhaps we should start something like "Save Ignorant Disney Fans" campaign instead?

Yuck, that drawing of Lady and Tramp is a terrible piece coloring book hack work. You couldn't find an example on Google Image Search of a real drawing from the film ?

That's from an actual drawing, Dave. Sorry you didn't realize it.