A Dark World, A Bit Brighter...

God of Asgard, and rock and roll... 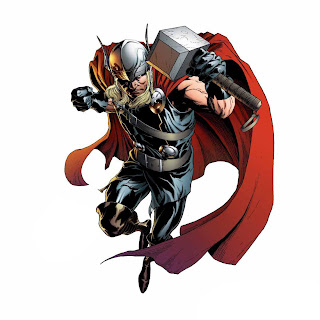 With each passing week, more and more information comes out about the God of Thunder's return...

Marvel Studios has finally released a more comprehensive description of Thor 2, aka: "Thor: The Dark World."  Read it below:

Marvel’s “Thor: The Dark World” continues the big-screen adventures of Thor, the Mighty Avenger, as he battles to save Earth and all the Nine Realms from a shadowy enemy that predates the universe itself. In the aftermath of Marvel’s “Thor” and “Marvel’s The Avengers,” Thor fights to restore order across the cosmos…but an ancient race led by the vengeful Malekith returns to plunge the universe back into darkness. Faced with an enemy that even Odin and Asgard cannot withstand, Thor must embark on his most perilous and personal journey yet, one that will reunite him with Jane Foster and force him to sacrifice everything to save us all.


Ok, so it's not a great deal of news, but it does flesh out the story somewhat.   It does give us a peek outside the curtain toward the direction that the screenwriters and Marvel plan on taking the character in this, and future films.

Looking forward to climbing further up the branches of Yggdrasil...
Posted by Honor Hunter at 9:26 AM

Looks like a great come back of Thor and I hope it becomes a hit and by reading this I think it will become the next best movie.

Thor 2 sounds cool, looking forward to it, but the only question I have about the Marvel universe in the future, is how does General Ross fit in, end of Hulk when Start mentions the Avengers, just curious to see how he fits in.