News From The Rebellion... 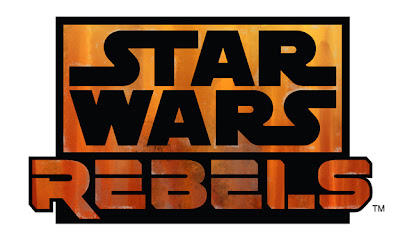 So now we have a tiny bit more on the coming Force...

At the Star Wars Celebration in Europe, Executive Producer Dave Filoni gave the audience a tease of what to expect from "Star Wars Rebels" when it premiers next year.  That's the logo up above, and there were several other promising pieces that he showed as well.

Quite a lot surprisingly, from a Rebel Alliance ship known as the Ghost that will play a prominent role in the film, to battles with Tie Fighters, a Star Destroyer, interior/exterior, to a stylize Storm Trooper were all seen by those attending.

One thing they all shared in common: a heavily influenced style based on original Star Wars artist, Ralph MacQuarrie. And it was pretty cool to see this is going to be the stylized look of the show.  It appears that Filoni is trying to branch out from "The Clone Wars" and give the series it's own feeling and look in the expansive universe of this famous galaxy.

Hopefully, the story/scripts will be as attractive as the art that was presented...
Posted by Honor Hunter at 12:23 PM