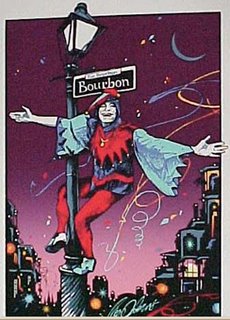 Well, it looks like we get our first glimpse of the characters that will be appearing in Disney's first 2-D animated film since 2004.

The Manhattan Theatre Resourse put out the list of characters in their casting call this week, so enjoy:

[LOUIS] A 20-40 year old Jazz singer alligator. Comic, manic, high strung. Can be African American or white. Has extraordinary jazz singing voice since he, in effect, "sold his soul" to get it. Dialect: New Orleans hipster.

This should give everybody an idea as to what to expect. It sounds great and Disney has a GREAT team bringing it to the screen.
Posted by Honor Hunter at 7:52 PM