How To Install Your Home Theater... 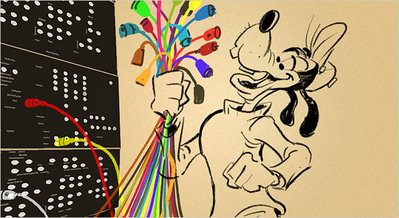 Well, earlier this summer Superman Returns and in about a year Walt Disney's Goofy will return!

Four new shorts are in development at Disney: “The Ballad of Nessie,” a stylized account of the origin of the Loch Ness monster; “Golgo’s Guest,” about a meeting between a Russian frontier guard and an extraterrestrial; “Prep and Landing,” in which two inept elves ready a house for Santa’s visit; and “How to Install Your Home Theater,” the return of Goofy’s popular “How to” shorts of the ’40s and ’50s, in which a deadpan narrator explains how to play a sport or execute a task, while Goofy attempts to demonstrate — with disastrous results. The new Goofy short is slated to go into production early next year.

I always loved the Disney shorts. Donald is my favorite Disney character, but Goofy is a wonderful way to begin the shorts program again at the House of Mouse.

Disney Executive Don Haln was quoted talking about the shorts in the weekend New York Times: “The Goofy short will be very funny, but we won’t have to spend a lot of money and time on it, which won’t diminish it one bit,” Mr. Hahn said. “Obviously there’s a financial component to these films. We have to make them responsibly. But the big investment is for the long haul. We’re saying we believe in new talent and new techniques, and they’ll pay dividends in 10 to 20 years, just as we’re reaping the benefits now from the investment we made 25 years ago, training John Lasseter and Andrew Stanton and Tim Burton and John Musker and Ron Clemmons.”

And you can definately see how the situation has changed since John Lasseter has become the head of Disney animation: “I feel Disney is a very different place than it was a year ago,” said Chris Williams, a story artist who is developing “Golgo’s Guest” and “Prep and Landing,” “and the shorts program is just part of that. It’s become a very exciting place to work.”

Here's to a great future at the movies. I can't wait till the lights go down and I get to see a Disney short before a new Disney film!
Posted by Honor Hunter at 12:05 AM