A lot of people have been asking for more info on the Disneysea project that was proposed for Long Beach in 1990 as part of the massive resort known as "Port Disney."

I have some pics, but not nearly as much as I'd like. This is a project that is dear to my heart since I have a great love of Disney and the sea... so putting them together would have thrilled me to no end.

It was with great sadness that I watched Tokyo get a variation of the park I wanted we here in southern California to have gotten. True, Tokyo DisneySea is not exactly the Disneysea that would have been part of Port Disney, but it was its close brother.

This my dear friends, it the park that got away. The one that would have made WestCot look like a stepchild. 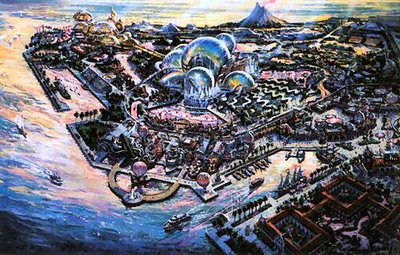 This here is an artist conception of what the park would have looked like in general. You can see some semblance of Tokyo with the mountain in the background and areas of Victorian style through out the park. The giant bubble icon is "Oceana." 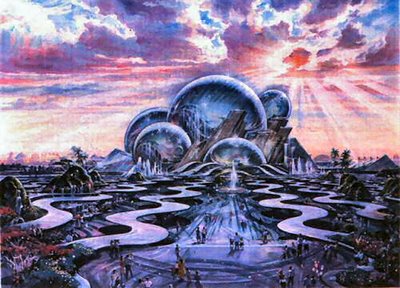 Oceana would be the center of the park, it's Sleeping Beauty Castle so to speak. It would also be a working ocean research center. There would be a large area devoted to education about the oceans. 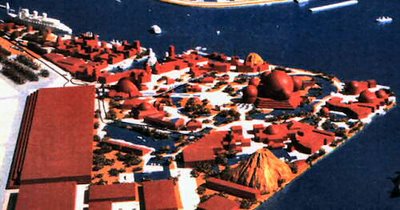 If you look over to the left on the main pic you see several golden saucer-like space ship buildings. Those would be for scientific study. 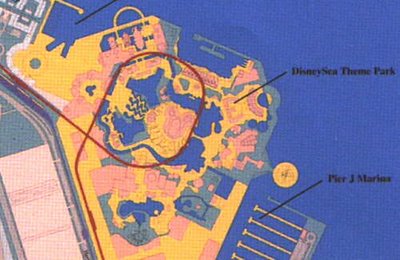 There would be over 400 slips for ships, this port would also have been where the west coast version of Disney Cruise Line stopped.

Port Disney was much more than just DisneySea. There were to be 5 themed resorts located there with thousands of rooms for guest to stay in. You can pretty much guess that it was very lavishly themed. As well as the park, the slitp, the port and the hotel resorts there was Port Disney's own version of Disneyland Center or Downtown Disney. It was filled with all kinds of restaurants and rides. They even had a white metal roller coaster that looked like it was made of wood. And there was this ferris wheel with an image of the sun on it. There were also various boardwalk games... now where have I seen this before? Amazing that we pay for DCA when so much of it was going to be an open area in Port Disney, huh?

Oh well, we can all dream of the part that was to be. Unfortunately this is as much as I have right now. I do have some items stuffed away somewhere that I will have to dig up somewhere with info on the names and themes of the hotels but I'll have to wait till I have the patience and time....
Posted by Honor Hunter at 11:31 PM