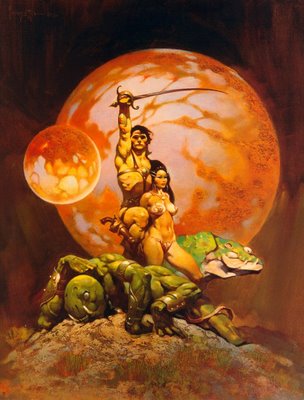 Walt Disney Pictures is in final talks to acquire the rights to the eleven volume "John Carter of Mars" series and film the first installment: "A Princess Of Mars". For anyone that doesn't know anything about it I suggest finding a copy of the books and start reading.

Edgar Rice Burroughs, the creator of Tarzan wrote many stories besides the Lord of the Jungle. The "John Carter" series are his best known works after Tarzan. They are exciting and fun, filled with the kind of wonder and thrills that young males desire when they go to the movies. But there is a strong romance element that will appeal to girls.

Rumor is that Lasseter was the one who desired the rights to the books. Disney had the rights to make "Princess" back in the early 90's but nothing ever came of it. The film has been set up at Paramount till last year when they decided to let it go. Now it may be back at Disney but we don't know what form it will take.

Being as Lasseter is involved one would think it was going to be thought of as an animated film. Sources have said that Andrew Stanton(Finding Nemo) has wanted to make a live action film for a while and wants to make his live action debut with "Princess". Stanton is busy right now working on his follow up to Nemo which is up later in the decade. So if this is true we won't be seeing "Princess" until early next decade.

I personally would love to see it live action. This has the potential to be another "Lord of the Rings" if done right. Maybe Disney should call Peter Jackson now that New Line is going to screw up... errr I mean make "The Hobbit" without him. Things should become clearer as time progresses.
Posted by Honor Hunter at 2:11 AM