It appears Bob Iger is letting investors peek into the future of the company. And being as he's put it in their online annual report he must be open to us seeing it as well. If you'd like to see some of the proposals for future theme parks/attractions Disney has planned across the world then go to the website for yourself.

Disney has been toying with the idea of having "Urban Entertainment Centers", think mini-theme parks built in a five to six story mall like setting. One of the areas they are in talks to develope is in Singapore. Here's some artwork showing an example of the type of Disney Entertainment Center they might build there.

The attraction that is being build at DCA in Paradise Pier which was to be called "Toy Story Midway Mania" is now called "Toy Story Mania". It will be a 3-D ride and from what I hear this artwork doesn't do it justice. This is supposed to open in June 2008. 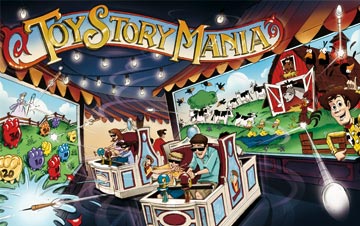 A proposal for a "Toy Story Live" show. It is unknown if this is planned for any park right now. It appears to still be in the Blue Sky phase of developement.

If you've been paying attention to Hong Kong Disneyland then you know that "Small World" will be opening there around the same time as "Toy Story Mania" opens in DCA. After that Pirates Of The Caribbean starts being build beyond the berm in Adventureland for a probable 2010 opening. Al Lutz of Miceage.com has posted a very detailed account of how this expansion of Adventureland themed to the movie franchise. We now have our first pic of what it could look like.

Later in the decade, think 2009 or so, the lagoon in DCA gets a night-time water show that is called "Wonderful World of Color". This is preliminary artwork so the show and name could change. 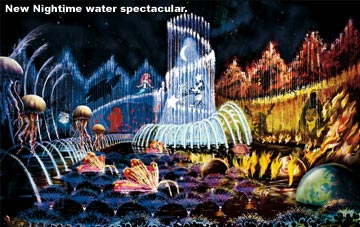 Those lucky bastards in Tokyo will get to ride their own version of Monster's Inc. over in the Tomorrowland section of Tokyo Disneyland. And you can bet it will be more detailed and elaborate than DCA's version. Ours cost around 30 million and theirs is in the neighborhood of 90 million. So just like "Pooh's Honey Hunt", TDL will have another superior version of what we get in the states. Here's yer first pic. 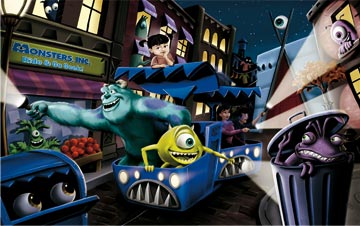 We all know that Bob Iger thinks the future of the Disney corporation is in the East. That's Far East as in China mainly. Hong Kong Disneyland is the first of possibley two parks they plan on building in China. The other park was planned for Shanghai by 2010 but that is not a done deal. Here is artwork for a proposed park in China. We don't know if this is proposed as the second park in Hong Kong or possibley the first one in Shanghai. The artwork shows part of the park with a land that is themed to "The Little Mermaid".

And last is the artwork for "Carland". Again, the name could change. This is a proposed attraction for DCA although I don't know if it will go in where "Route 66" is or in the boringly bland "Land" section of the park. It looks like it could be fun, but I wish the Cars looks more like the ones from the movie with eyes and mouths and such.

Hopefully we will get to see some more artwork for the DCA expansion and the new parks and resorts in Asia will be announced in the next year or so.
Posted by Honor Hunter at 11:36 AM