Later this month(January 24th), the Walt Disney Company will announce what many online Disney fans have known about for some time.

Midway Mania will be coming to Paradise Pier by summer 2008. Gone will be the cheap plaster and stucco replaced with heavy theming of the Victorian/Coney Island feel that we Disney fans call "Mictorian".

From the rumblings we're hearing the new area in front of California Screamin' will look simular to the Hotel Del Coronado. This will be a much needed layering of the area. It will take visitor back in time which is one of the complaints it doesn't do right now. 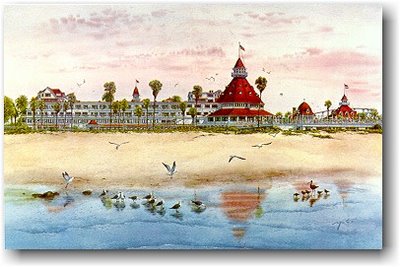 Now if they wind up approving that MASSIVE 700 million dollar expansion we may see DCA looking pretty swank come its tenth anniversary.
Posted by Honor Hunter at 12:40 PM