What a Onederful Wurld... 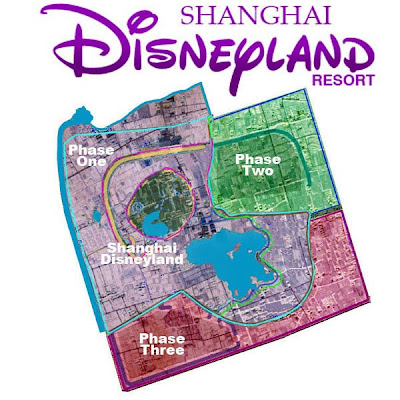 There seems to be a lot of news coming out from the Chinese media about the Mouse's Middle, Magic Kingdom...

Over at my friend Alain's website, Disney and More, he's been posting a great deal of coverage of the news about Shanghai Disneyland. Great stuff if you haven't read his blog.

From what I've been told, the media has had very limited knowledge of what Disney and the Shanghai government are planning. This is by intention and one of the reasons you haven't seen or heard much about it. This is Bob Iger's first park on his own and not fixing up Eisner's messes. I believe he wants to get it right and he wants it to be a surprise. Getting details about this park/resort has been very difficult. Put all the secrecy together with a weak economy and you can imagine the trouble prying open those Bothans mouths.

There was an article the other day that Alain quoted as saying the total cost of the 107-square-kilometer project would exceed 100 billion yuan ($15 billion). Now, while the resort is not as big as Walt Disney World (twice the size of Manhattan Island), it is far bigger than any other resort I believe except Disneyland Paris (which is 20 km, like Shanghai). Far bigger than Hong Kong Disneyland which will tap out at two parks and a half dozen hotels approximately, far bigger than the Tokyo Disney Resort or the original Disneyland Resort. And now officials have come out to discount this as they say final cost have not been determined. I have no inside knowledge as to how much exactly will be spent, but my suspicion is that the article was quoting an estimate as to what the final resort price would be. That is, over a three phase period. As in three gates, multiple hotels, retail environment, etc. and so on. This would make that projected cost of 15 billion much more reasonable as it would occur over decades, not years. The initial cost I've heard is somewhere around/between 3 and 4 billion. Of this amount, the Shanghai government and the partnership company, Shanghai Shendi Group Co. Ltd. will assume the majority of that cost. The Mouse will retain a minority interest similar to the contract with Hong Kong, while still running the actual resort.

From what I've gathered, the first phase will be the "Magic Kingdom" style park and two or three hotels and a version of the Downtown Disney retail area (something that has yet to come to HKDL, but will soon enough). This phase should be done by late 2014 with a planned opening of early 2015. The style may be similar to past parks, but it will also strike out in a different direction, perhaps being the most different of any Disney theme park that shares the trademark style fans are used to. From what I hear, the area around the park will be more extensively used than in Hong Kong as well.

While the public face of Honk Kong Disneyland Suits is that they have nothing to fear from a Shanghai Disneyland, the behind the scenes are a different matter. As work on their expansion winds to a close in 2014, expect a new announcement to counter the opening of the second Disney park in China. Bothans have already told me that work and proposals, all blue sky of course, are quietly underway in Glendale. The scope and grandeur of Shanghai will be bigger and different. The plan will be to offer a different reason to go to this theme park as opposed to the one in Hong Kong. Just as there are reasons to visit Disneyland versus Disney World, there will be reasons to travel between these two parks/resorts. And if you were wondering, Shanghai is WDW to Hong Kong's Disneyland. Each Disney, both different. I like that. I hate the idea of cloning and if they're going to have these two parks on the Asian mainland, it's good that they will have their own personalities.

When 2015 rolls around it's going to be interesting to see what the birth of this Sixth Kingdom means to our world and the Disney world...
Posted by Honor Hunter at 8:49 PM

I was afraid Iger was just going to clone everything. But let's hope this doesn't mean Disneyland will have a Pixarland instead of a Fantasyland.

So does that mean two different castles? HKDL is Sleeping Beauty, so will Shanghai be Cinderella? Will it be a clone of WDW design or a unique design like they did for Paris?

I wonder if this project won't end up as another one of China's ghost towns.

Anyways, it will be China's responsibility and not Disney's anymore. Disney could barely afford to keep up with Florida's WDW. What a joke!!!

I have plenty of reasons to believe Shanghai will bear more than a slight nod to Chinese culture and stories...

Interesting plan indeed. I'm hoping for a Mulan ride/show. But having been to the Shanghai World Expo, I'm afraid I will not step onto the Chinese mainland again. Maybe HKDL once it gets all the much-needed rides.

I am so excited about this new Disney Land coming up... Having it established in Shanghai is quite a good choice and the definitely the Asian people can no longer wait for it to stand and operate.