Shine that bright light over here... 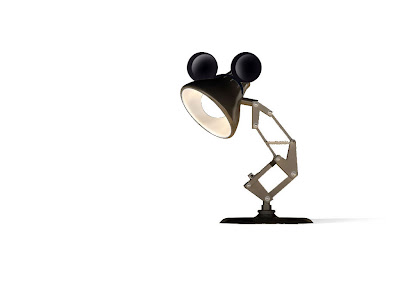 The video of the interview with my favorite living animator is all in French. Who would have thought living over in France during the making of Tarzan would have left him so, uhm, fluent and cultural? But there is also an English translation of the interview as well. And it's a very thoughtful piece that has an interesting jewel of information near the end.

Keane says that when you strip it apart down to what the Lamp really is about is this: "Wouldn’t it be cool if?"

And then he says that what the Mouse really is about is this: "Once upon a time…"

He goes on to talk a bit about how different that means they are/should be. And how it's taken John a difficult journey over the past two years as he figures what the animators in the Hat Building are like, and how they should be and why he's learned to not make them Pixar South.

Which when you think about it kind of explains the journey the animation studio has been on over these last three years and how now the animators have some success to show for all their hard work. And how now, after all these years of being in free fall, the heart of the Walt Disney Company may have figured out its place in the world again.

That's a very interesting perspective. Makes me think about "Bolt" differently. I like the film very much but I wonder if it was trying to hard to be like a Pixar film?

"Bolt" had a very good try, actually. Some people didn't think it was quite Pixar-grade, but I disagree. It was good enough for Pixar. Definitely not as good as some Pixar movies I could mention, but I like "Bolt" better than the original "Toy Story," "A Bug's Life," or "Ratatouille." Maybe even "Monsters Inc" doesn't entertain me quite as much as "Bolt" does.

That was easily the best animated film from Disney of the 21st century, and I won't say the best of all time because too many 20th century lovers will disagree. And I can see why people might enjoy that stuff more, but those just don't entertain me as much.

I clicked the link to Michael Barrier's site. Is anything good enough for that guy? Even when praising Tangled, he considers its pros to be accidental. Barrier is a real-life Anton Ego.

Thanks for the link. Glad you appreciate the interview as we had fun doing it with Glen.

I swear to God that this website is owned by Disney, when I was at California Adventure the WED area was called Blue Sky Disney! It seams as though this site is to just self promote Disney and to see what people are thinking about their products for marketability. If that's so, then here's my opinion, make more Tron films, that is all!

You obviously haven't read much of this blog. Honor could be sued by many people for slander if he actually was doing this in an official capacity. Just click under DCA, Pressler, Rasulo or several others. It's clear he has a love of Disney and is not a shill for the company.

You clearly haven't been here very long, but welcome to Blue Sky.

"If that's so, then here's my opinion, make more Tron films, that is all!"

You want another one? You've lost all credibility then.

Wow Tron Sux, you are a real asshole!

the new tron was a disaster. Ugly, badly "designed," bad script, juvenile, and boring. It looked like the interior of a cheap limousine.

While I thought the story was weak and would have liked to of seen Lasseter and the Pixar crew more heavily involved from the beginning, to call the film badly designed is something I'd disagree with.

I loved the look and feel of the place and want to return there as soon as possible. I certainly hope that Disney signs off on a TR3N.

I'm glad to learn that Lasseter is respecting the differences as mentioned in the article. When I'd heard a few years ago that he would have more influence in the parks, I thought he was the perfect guy for the job, and that Pixar could bring some new life into the theming. Now, I think the Pixar overlays are a bit heavy handed. Hopefully moving forward he will allow Disney to retain it's identity and they can walk side by side a bit more. Carsland is a perfect example of overdoing it. Way too franchise specific. Calling it Radiator Springs or Route 66 would be honoring the traditional style of naming a "land" while incorporating a newer film.