Return Of The Jedis... 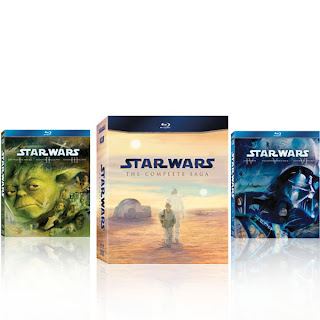 And at least half of them I'll watch. Lucasfilm announced today the special features as well as the cover art for Episodes I-III, Episodes IV-V and the Complete Collection.

Bring home the adventure and share Star Wars™ with your whole family – when STAR WARS: THE COMPLETE SAGA comes to Blu-ray Disc from Lucasfilm Ltd. and Twentieth Century Fox Home Entertainment! To be released beginning on September 12 internationally and on September 16 in North America, the nine-disc collection brings the wonder of the entire Saga direct to your living room, where you can revisit all of your favorite Star Wars moments – in gorgeous high definition and with pristine, 6.1 DTS Surround Sound. Dive deeper into the universe with an unprecedented 40+ hours of special features, highlighted by never-before-seen content sourced from the Lucasfilm archives.

STAR WARS: THE COMPLETE SAGA ON BLU-RAY is presented in widescreen with 6.1 DTS Surround Sound. Special features include:

* DISC NINE – THE STAR WARS DOCUMENTARIES
o NEW! Star Warriors (2007, Color, Apx. 84 Minutes) – Some Star Wars fans want to collect action figures…these fans want to be action figures! A tribute to the 501st Legion, a global organization of Star Wars costume enthusiasts, this insightful documentary shows how the super-fan club promotes interest in the films through charity and volunteer work at fundraisers and high-profile special events around the world.

* NEW! A Conversation with the Masters: The Empire Strikes Back 30 Years Later (2010, Color, Apx. 25 Minutes) – George Lucas, Irvin Kershner, Lawrence Kasdan and John Williams look back on the making of The Empire Strikes Back in this in-depth retrospective from Lucasfilm created to help commemorate the 30th anniversary of the movie. The masters discuss and reminisce about one of the most beloved films of all time.

* NEW! Star Wars Spoofs (2011, Color, Apx. 91 Minutes) – The farce is strong with this one! Enjoy a hilarious collection of Star Wars spoofs and parodies that have been created over the years, including outrageous clips from Family Guy, The Simpsons, How I Met Your Mother and more — and don’t miss “Weird Al” Yankovic’s one-of-a-kind music video tribute to The Phantom Menace!

* The Making of Star Wars (1977, Color, Apx. 49 Minutes) – Learn the incredible behind-the-scenes story of how the original Star Wars movie was brought to the big screen in this fascinating documentary hosted by C-3PO and R2-D2. Includes interviews with George Lucas and appearances by Mark Hamill, Harrison Ford and Carrie Fisher.

* The Empire Strikes Back: SPFX (1980, Color, Apx. 48 Minutes) – Learn the secrets of making movies in a galaxy far, far away. Hosted by Mark Hamill, this revealing documentary offers behind-the-scenes glimpses into the amazing special effects that transformed George Lucas’ vision for Star Wars and The Empire Strikes Back into reality!

* Classic Creatures: Return of the Jedi (1983, Color, Apx. 48 Minutes) – Go behind the scenes — and into the costumes — as production footage from Return of the Jedi is interspersed with vintage monster movie clips in this in-depth exploration of the painstaking techniques utilized by George Lucas to create the classic creatures and characters seen in the film. Hosted and narrated by Carrie Fisher and Billie Dee Williams.

* Anatomy of a Dewback (1997, Color, Apx. 26 Minutes) – See how some of the special effects in Star Wars became even more special two decades later! George Lucas explains and demonstrates how his team transformed the original dewback creatures from immovable rubber puppets (in the original 1977 release) to seemingly living, breathing creatures for the Star Wars 1997 Special Edition update.

* Star Wars Tech (2007, Color, Apx. 46 Minutes) – Exploring the technical aspects of Star Wars vehicles, weapons and gadgetry, Star Wars Tech consults leading scientists in the fields of physics, prosthetics, lasers, engineering and astronomy to examine the plausibility of Star Wars technology based on science as we know it today.

Quite a lot of Star Wars to love, right? My biggest complaint is there is no copy of the original, untouched series to go with these. That would be a nice cherry on the top and a nod of respect to the fans that won't forgive George for what he's done with the Prequels. That said, it should be interesting to watch and will obviously sell billions more for the Lucas Empire.

Now, if he'd only edited some of that sappy dialogue out for we in the Rebellion...

Not only would releasing the unadulterated theatrical cuts have been a nod of respect to the fans who won't forgive him for the Prequels but who also won't forgive him for ruining the original trilogy with all of his meddling changes: Greedo shooting first, changing the dialogue of Vader and Palpatine in ESB to spoil "I am your father!" re-dubbing Boba Fett's dialogue with that lame kiwi Temurra Morrison and Hayden Christiansen at the end of ROTJ instead of Sebastian Shaw.
Give us the original classics as we saw them in the theaters when we were children or we won't be buying this crap.

*awaits the barrage of people going 'Lucas raped my childhood' and 'no way I'm falling for this again!' whilst they all buy the films anyways*

Lucas botched the prequels so much, I had a thought - maybe many years in the future some one will take his story and make a Star Wars 'reboot', the same way we see so many versions of Batman, Spiderman, Lord of the Rings, so on. Maybe whoever will get it right next time.

It's nice to see that the original TV specials are included as well as some new material on disks 7-9. I like these movies, and am looking forward to this latest set. I don't mind getting a nice shiny box set, or limited edition art book every few years based on my favourite childhood movie. These films continue to inspire me since seeing the first one in 1977. No big deal that the original cuts aren't included, I can always watch the first 3 on Laserdisk if I need to see the original cuts.

By the way, George hasn't been wasting his money gained from all this merchandising. He's developed some more of his land in Marin County, with more state of the art facilities coming at Grady Ranch, the Letterman facility at the Presidio is impressive, as well as the new School of Cinematic Arts complex at UCLA.

The Complete Saga is only 3 movies long... what are the other 6 discs for???