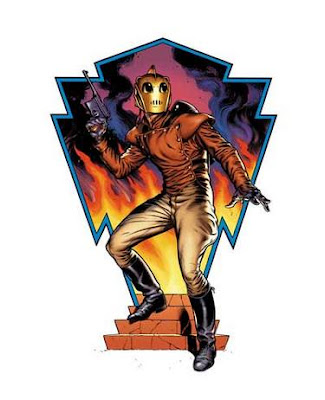 No sooner had I mentioned that I'd like to see a sequel/reboot than a jewel was found...

Joe Johnston did an interview with Film Journal and mentioned that he'd love to do a sequel to "The Rocketeer." Now, he didn't mention a reboot so I take it he's talking about a continuation and not a reinterpretation. If you've seen some of the Q&A from the 20th Anniversary screening of the film at the El Capitan, then you saw Billy Campbell still looks pretty good. I don't know if I'd buy him being only a few years older though.

I wouldn't want to see a film with this character set in the 50's. That's a little too far from the material, but maybe they could get away with early 40's? Have Cliff Secord on some secret mission in the waning days of World War 2. It could/would be an interesting thing to see. Maybe they can get Christopher Markus and Stephen McFeely to write the script based on their work on "Captain America" and then get Joss Whedon to do a polish on the dialog. Maybe? That would be oh, so cool.

And then, if I could just get Disney to adapt "Crimson Skies" too…
Posted by Honor Hunter at 10:43 PM

More Rocketeers and an adaptation of Crimson Skies would be soooooooooooo cool!

I've purposely avoided watching The Rocketeer even though I know I'd love it just because of how sad I'll inevitably be to learn there was no sequel. I still want to see it, however.

honestly, I've always been a sucker for this alternate timeline stuff; steampunk, art deco utopias, and the 30's-40's airship stories (could be connected to the art deco thing). I'd swoon for a crimson skies story...

Crimson Skies directed by Peter Jackson with his normal writing team. Now that would be a film I'd be lining up months ahead for!

I'm going to go out on a limb and say that I'm glad there's not Rocketeer sequel. Mostly because everybody complains about "sequels" when one comes out that they don't like, and criticize Disney or whoever for lacking creativity to make original films and all of that stuff.

I wouldn't mind a Rocketeer cartoon or something like that, but no Rocketeer Legacy thanks.

Well,
At the 20th Screening Event they where pretty clear that in a sequel they wanted to continue Dave Stevens story arch and do the whole New York storyline that's in the comics.

I'm sure there would have to be a recast.

That's true, but that was when the sequel was originally being thought up. At this point, if a sequel were to happen, then they may to rethink that. The 20th Anniversary Screening was such a great event, and it really made me hope we might see a second one soon...Disney, ball is in your court!