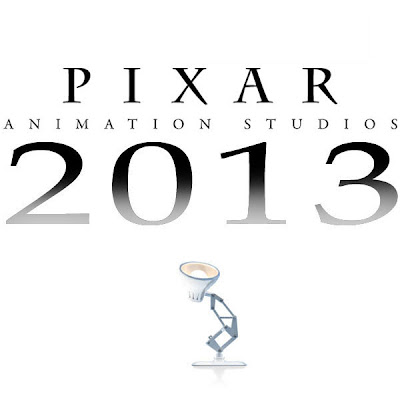 The Lamp has scheduled it's next animated film...

And for all those out there that are screaming about too many sequels, it's an original story. As per their Modus Operandi, the gang up in Emeryville have been very cryptic. No plot details and no information on who is directing or writing it, only the release date: November 27, 2013.

From what I've heard, it's likely the next animated feature from Pete Docter since he's not helming the sequel/prequel to his "Monsters Inc." film. It probably won't be too long before we'll be hearing about the next release of the Mouse's other animation house in Burbank. The one that's coming in 2014.

It'll be interesting to see when that happens...
Posted by Honor Hunter at 10:24 AM

There is no WDAS feature in the pipeline in 2013?

When can we expect to hear more about these films?

Wreck-It Ralph is for 2012, not 2013. Right now there are two Pixar films slotted for 2013 and no WDAS films. That was the original poster's point.

Actually, "Wreck-it Ralph" is due out holidays of 2012. I don't believe WDAS has a film scheduled for 2013 at this point. Ralph switched places with "Monsters University".

Chris Williams' "King of the Elves" is set for 2013 at WDAS although it has not been officially announced yet.

Weren't those "dinosaur images" in the background from a partnership of Pixar with the Discovery Channel for a documentary series called "Reign of Dinosaurs"?

Yes, all you have to do is go back and look at the past articles that Honor posted about the future of WDAS. King of the Elves is 2013.

Well, if J.L. is true-to-form then I expect he'll have another Rescuer's movie out for 2014 ... you know, something which will really bring back the glory days of hand-drawn animation.

I can't imagine them doing another Rescuers sequel without Eva Gabor (god rest her soul). I don't want them to bring back the old glory days of animation. I just want Disney to actually make a good promotable hand drawn film and schedule it at a good time, preferably a non fairytale one.

Your point: "I just want Disney to actually make a good promotable hand drawn film and schedule it at a good time" is a point of view shared by many of us , I'm sure. I hope that happens , but it seems uncertain now ... so many high hopes in 2006 , but those high hopes have pretty much been unfulfilled.