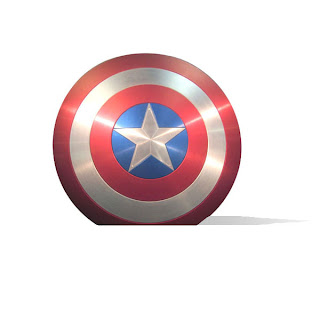 I know I said I don't do reviews anymore, so I'm labeling this a commentary...

Follow that with a hundred exclamation points. I am absolutely in love with it. It's fun, earnest and filled with everything I had hoped it would contain. The script by Christopher Markus & Stephen McFeely with an uncredited polish by Joss Whedon, is great and the characters are real, interesting and you care for them. Something that doesn't always happen when watching a film these days. This is Joe Johnston's best film, by far. This puts him in a whole new league in my opinion. He's always had potential, but there seemed to be something holding him back in each of his films. Usually it's the script. It is no surprise then that this is the best script he's had to film and it shows.

Although "The Dark Knight" is my favorite superhero film, this is my favorite adaptation. It's the closest thing I've seen to a perfect adaptation of the material. In a word, it is authentic. It takes things from many periods and many storytellers. There's the familiar Joe Simon & Jack Kirby stuff as well as the classic reboot by Stan Lee & Jack Kirby. But they also left room to use plot lines from the likes of Ed Brubacker and Mark Millar. You can tell where they leave off, and more than others, I can see how you could spin off several properties in the film. Bucky for "Winter Soldier," "The Howling Commandos," and even a glimpse of what a "S.H.I.E.L.D." film could be.

But this is a film that lives on its own. Unlike "Iron Man 2," where two thirds of the film felt like a set-up for "The Avengers," this film is totally self contained. There is no need to see or have seen another Marvel film. I was even fascinated by the closing credits and the way Johnston used them. Pure brilliance. If you waited around after the credits then you saw the teaser trailer for next summer's big offering, but I want to see a sequel to this film. And I hope at least part of it stays in the past that Steve Rogers longs to be in.

Because I know how he feels...
Posted by Honor Hunter at 3:44 PM

You are 250% correct. The reviews don't do it justice. It is a fantastic popcorn movie I'd see as a kid, then want to buy the comics and the action figures. Bravo, Joe Johnston. You made Captain America a reality.

It was pretty good. While it is a lead up to The Avengers, this was at least a nicely contained, whole story. The way the Avengers twist ties into the story is a very nice compliment to the characters and the story at hand.

Thor is the film I feel is just a teaser for Avengers with a poor story to it. That film was more like a "here's this character, know him, love him, cuz he'll be in Avengers!"

I didn't know Tony Stark's dad would play such a big role, and I loved it. Also Tommy Lee Jones' "I'm not kissing you" line lol.

Oh man, now I REALLY, REALLY want to see it!

My feelings for Thor were the same as Honours description of Cap's movie here. It gives me a lot of hope and happiness that the marvel studios are able to produce movies for super heroes that emphasises the merits of the original source material and of the art of movies in general. Unlike Nolan they don't try to be anything bigger than they actually are, they simply tell good, fun, universally enjoyed stories that you would see in the cinema, kind of like the old days of film. No one saw a Chaplin flick to consider the dark tradgedy that is the modern world, that was subtext to be balanced with comedy.

In short, you're making me really excited for this movie when it hits the UK!

I would like to give a shout out for Iron Man 2, however. I brought a lot of friends who knew nothing about the avengers and they loved it. They felt, as I did, that the movie was about testing Iron Man's ability to be responsible to the people he protects. It didn't have to be shield testing him- it could have been the FBI or anybody. But Shield was a tiny detail that was seen as a nod towards the comics to hint at the sequels. Unfortunately people didn't seem to pay enough attention to that theme and misread it as a flagrant sign of fan-service for the avengers set up instead of tony starks growth as a character.

If anything, my parents said the sequel was allowed to have more fun than the original without treading on the toes of the character development- and that's no shame. Looks like Marvel are doing pretty good for themselves...

No one saw a Chaplin flick to consider the dark tradgedy that is the modern world, that was subtext to be balanced with comedy.

There were deep films and bleak films back in the old days too. Not everything has to be a lighthearted comedy or action film either.

Absolutely, there was variety, which is exactly my point. People have tried to pin down the superhero films as a formulaic genre, forgetting that they became popular in the first place on their own merits. Sure, certain elements are/were borrowed but ultimately it's a question of 'what can you do that's unique'? If this movie had been a dark retelling of Cap's past to compete with Nolan, why would I need to bother to watch it when I can just go and see a Nolan flick?

Anyways, I've mostly been hearing the opposite of good about Captain America. Mostly it seems to be that it's a feature-length teaser trailer for The Avengers in which things happen one after the other. Red Letter Media was particularly damning, and actually contrasted it against The Rocketeer, which has things like a story, characters, cause-and-effect circumstances and things like that.

I dunno'... I was somewhat interested in it, but now I'll maybe wait for the cheap theatres. Besides, Cowboys and ALiens is coming out on Friday anyways.

It is no way just a set-up for "The Avengers." It could easily exist on its own with no need for a link to that film. It's Johnston's best film, by far. I loved the "Rocketeer," but I had problems with it. This is a great Saturday Matinees, right up there with "Spy Smasher" and the like. Don't wait for a cheap theater, see it in a good theater with a proper screen.

As for "Cowboys and Aliens" save that for the cheap theater. Everything you're thinking about this, apply to that... sadly

I wasn't sure if I'd see this film, but your post has intrigued me. So I'm going.

The first 90% of the film is a good, self contained story. The last 10% just shoves the Avengers in your face, which in my opinion ruined the film. I was not satisfied whatsoever with the ending, which disappointed me after such a good first part.

Im glad they didn't include nick fury in the howling Comandos with the infinity serum, that would have been way to over the top

I wish they left swastikas in for the nazi's. It was a big part of the comic books and added to the time period and utter evil Cap was up against.

please start posting more you are my favorite blog

No you won't what?

the alan menken composed musical number is the highlight of the flick. oh, and chris evans' moobs.