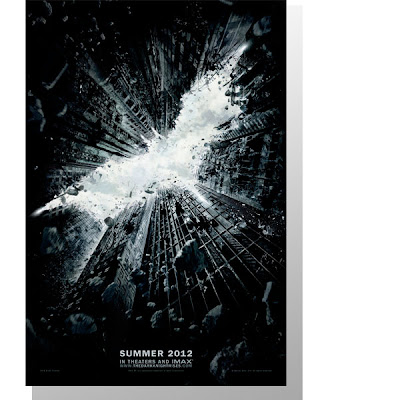 The teaser poster for Christopher Nolan's final Bruce Wayne film is out...

Nice use of negative space. Hopefully the film will live up to the incredible amount of hype that will be heaped on it after the box office and critical hit of "The Dark Knight." Will it be as good as that film? Doubtful, but Nolan has never let me down. I've never seen a film of his that made me feel I didn't get my money's worth. If he turns a character like "Bane," which is totally uninteresting to me, I'll be very happy. He has a great actor playing him. Selina Kyle will hopefully turn out to be a great addition as well, but I'll wait and see. Hard to believe this time next year it'll be out.

And then it'll be time for someone else to reboot the Caped Crusader...
Posted by Honor Hunter at 5:40 PM

I wonder if it will be as good as Batman Begins. TDK had a terrible third act. One can only hope the travesty that was Inception isn't a bellwether for Nolan's diminishing skills. Memento is still his best movie.

I thought the 2nd movie was bad, horrible. It was unnecessarily violent and it didn't have much comic elements. Well, there's always the rental to see it, thus no risk to my dollars.

It was unnecessarily violent and it didn't have much comic elements.

I'm going to throw out the idea that it wasn't supposed to be comic. Much of the point of the movie was that the conflict between Batman and The Joker was bleak and violent. The fabric of civil society was on the line, which doesn't leave much room for laffs.

Part of the movie is being filmed here in Pittsburgh... there's been several casting calls and the latest, they're looking to fill Heinz Stadium full of Steelers fans for something or other.

It's kind of neat, actually. The filming will be taking place a mere two blocks from my office! I don't know if this movie will be better (or, could be better) than Dark Knight. I guess we'll have to wait and find out!

Never been a huge Nolan fan. He's had a good run of films and most are enjoyable, but I hate it when a director takes bill over the film and story being told. Batman Begins grew on me over time, I found The Dark Knight nowhere near as good as others seemed to praise it, I enjoyed it but didn't find it to be the masterpiece others did. Inception peeked my interest until all the "Nolan can do no wrong" people started to take over every conversation and I lost interest. Still haven't seen it and don't care to.

As for The Dark Knight Rises I'll probably just wait for the DVD like I did its predecessors. Honestly though, on most film discussions these days albeit, Toy Story - Transformers - The King Speech it seems there's always a handful of people wanting to compare The Dark Knight Rises and state it'll be the greatest movie ever made bar none because a, Dark Knight was the best movie ever and b, Christopher Nolan can do no wrong. To some I'm sure this is true. But if there's one thing I hate it's others opinions being forced on me as fact aside from the point of any conversation.

This is going to be bad. Anne Hathaway is a terrible choice for Catwoman and Bane is the worst choice for the villain, he was never a main villain in the comics, what makes them think it'll work here? Also The Dark Knight is a really overrated film, it's getting bad. Bale's voice is horrible and he's silly as Batman.

Plus Nolan's take on the franchise is to ground Batman in reality. Really? This is a man who dresses up like a Bat and fights crime and you're putting that into reality? This is a character that lives in the same universe where a man can fly and shoot lasers from his eyes and a guy can create imagery with a ring.

I'll take Burton over Nolan any day, Burton had the best Gotham City, Nolan's isn't even Gotham City, it's Batman in Chicago. I still prefer the Burton films. Batman Begins was so far the only good one.

wow..usually I don't like to respond to this stuff, but there's a bit too much hate going on here. I guess I'm one of the few people in this world that thinks the Nolan "Batman" series is the best film version done yet. Is it perfect? nah.. But it's better in MY opinion then all of the previous comments against it here would lead you to believe.

Usually the only people who comment on these "comment" areas are those who are in direct opposition to the blog entry. I just wanted to be one to say that I believe Nolan has amazing talent, something that is lacking in Hollywood these days. Is he perfect and can he "do no wrong"? nah..he can..and has missed things, but those areas are small in comparison to the amazing films he's created.

I think Anne will be a sweet take on Ms. Kyle and Bane can't be worse then the version in "Batman and Robin". I was totally unsure about using Heath Ledger as Joker, but he gave an incredible performance...so give "Bane" a chance people. It might just work!

I can't wait till this film comes out and will make for a sweet trilogy. and you know what..I know I'm not the only one who feels the hate is uncalled for. I'd say many of those who helped at the box office would agree Nolan's talented and this next Batman film will probably bookend a great series!

I cannot wait for this movie next year. I am looking forward to the trailer this week as well.

"The fabric of civil society was on the line, which doesn't leave much room for laffs."

When I referred to comic, I wasn't referring to comedy. Batman was a comic book. Get it?

Wait_For_Rental said: "When I referred to comic, I wasn't referring to comedy. Batman was a comic book. Get it?"

Haven't read comics in a looooooong time, have you Wait?

There are no laughs in a Batman comic. Most comics aren't "funny books" because they focus on serious stories. Batman has focused on dark, violent stories since the 70's. That's forty years. Perhaps you are referring to the 60's television show? Which was a parody of comics using Batman, it wasn't Batman.

Pick up a "comic" and I think you'll get it's nothing like what you're thinking it is.

Doubling down on dumb? If you read what I wrote, you wouldn't have to respond like that.

I KNOW COMIC BOOKS DO NOT HAVE COMEDY. *facepalm*

I was replying directly to Cory Gross who also make the same comment. Why are you guys so predictable?

Bruce made an entirely accurate response to you.

You made the comment that Dark Knight was too violent and wasn't comic enough, which I mistakingly took to mean "funny". You corrected me by saying that your comment meant that it wasn't very much like a comic book. Bruce replied with the observation that you must not have read any Batman comics recently because Dark Knight is very much in keeping with the tone of the comic in the last several decades.

"Bruce replied with the observation that you must not have read any Batman comics recently because Dark Knight is very much in keeping with the tone of the comic in the last several decades."

You made this up. He did not say that at all.

He said repeatedly that "There are no laughs in a Batman comic. Most comics aren't "funny books" because they focus on serious stories...." He ended with "Pick up a "comic" and I think you'll get it's nothing like what you're thinking it is." So he clearly thinks I was referring to comedy=funny.

His response was exactly your response AFTER I told you that you misinterpreted my post.

I'll stop before this get further into comedy, which I keep saying it has nothing to do with it.

How about some real discussion?

IMO... I thiink Nolan will kill him off in the end. What other way to go out with a bang, wrap up a trilogy, and assure no one will ever touch his version of Batman?

Think about it by the end of the second film, his girlfriend is dead, he's on the run, the entire city is against him, the cities 'white knight' is gone, where else to go? Have him do some awesome stuff... and then kill him...

That the Nolan movies are in keeping with the tone of the comics for the last several decades is exactly what Bruce said:

"There are no laughs in a Batman comic. Most comics aren't "funny books" because they focus on serious stories. Batman has focused on dark, violent stories since the 70's. That's forty years. Perhaps you are referring to the 60's television show? Which was a parody of comics using Batman, it wasn't Batman."

He couched it in the idea that you meant comics should be more lighthearted because you have yet to clarify what you meant by saying that The Dark Knight was not "comic" enough. And when I specifically asked you what you meant by "comic" if we keep misnterpreting it, you refuse to answer. Have it your way, but between refusing to clarify and gratuitously heaping on insults it only makes you look like you don't actually have a point. Put up or shut up.

What exactly is The Dark Knight missing that makes it unlike the Batman comics?