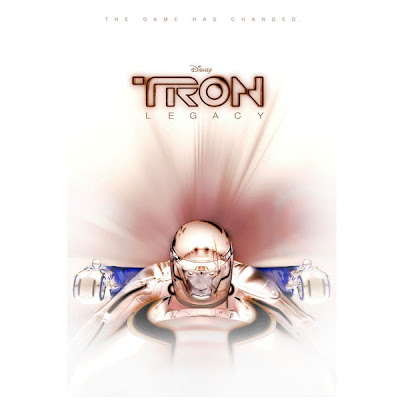 Well last night what arrived on my doorstop would surprise some of you...

Actually, this time it didn't arrive in a nonedescript manila envelope like other secret packages most of the time here at Blue Sky Headquarters. Instead it came as a digital document. Appropriate for a copy of the "Tron Legacy" script, yes?

That's right, the Tron sequel script. Actually, I think it's an early draft of it, as there is only one writer listed on it, Richard Jefferies. Adam Horowitz and Edward Kitsis' fingerprints are nowhere to be found on this draft. I was thinking of reading it, but I decided I wanted to go into the film fresh with no preconceived notions of what I was going to be seeing. I asked a friend that is a huge Tron-Geek if he'd like to review the script for me. Nada. It appears that he doesn't want to know too much before the actual film comes out in December... I don't blame him. So then I turned to another friend whom I'll call "Tron Unit" to review it. Thankfully, he said yes. He finished it very quickly and then asked if I still wanted his opinions because he could tell that this was an earlier version of the script and not the final one. Yes, I said. I thought that it would give fans the ability to see where they were going in the earlier draft of the script. The differences can be pointed out after you leave the theater this holiday. And with that, here is his review of the Jefferies draft of "Tron Legacy" for your digestion:

Well, I guess he didn't like it. That's fine, as this project has gone through several revisions and writers. The fact that the latest drafts were handled by people that have written "Lost" is reassuring. I've talked to a couple Bothans that say the final script and film itself are significantly different that this version.

And that trailer coming out soon has been described as very impressive...
Posted by Honor Hunter at 6:49 AM

I wasn't a fan of the first Tron. This sequel is just as bad.

Yes, its probably a very good bet that the final script is different than this one that was reviewed.

Let's just hope for the best.

Yeah, this is pretty much an early draft. I've read a revision and the story is way different than this draft. Fear not, it's a lot cooler. Not that the version I read was the shooting script, but it was headed in that direction.

that is definitely not the movie that is being worked on.

No, this can't be the actual film. Because there is no mention of Flynn's son, Sam played by Garrett Hedlund.

I don't hold out much hope for this sequel. It's sounding more & more "tween"-centric with special extended cameo appearances by the originals just to keep the fans from frothing at the mouth & storming the gates.

TRON, the original, championed the age of the computer back when computers were few & far between. Now, computers are everywhere - In your car, in your phone, in the kitchen, in the office & school...

The best time for a TRON sequel would've been 1997-2000 when the Internet was still emerging & it could lay claim to championing the Internet back when most connections were dial-ups & people were still involved with using "Marquee" & "Blink" HTML tags.

TRON 2.0, the PC FPS game, would've been a better vehicle for extending the franchise had Disney not botched it so badly. No SDK, no marketing (Are the mouse execs still happy that they spent all that money on what's-her-name to voice Mercury?) & the World's Most Cliched Plot all but killed that game before the game hit the shelves.

I think Disney really missed the boat on capitalizing on this franchise & is now either playing catch-up or just squeezing the last few desperate drops of blood from a stone to win back the boys who equate "Disney" to "Princess."

Maybe the TRON: Legacy video game might provide some entertainment... Provided that the Mouse will actually release the SDK this time...

Tron 2.0 was a horrible, horrible game. Everything about it from the design to the characters (Jet Bradley, Mercury, etc) to the execution was just awful. I have much higher hopes for the Tron Evolutions game. I was all for a sequel back in the mid 80's but because the first film was a bomb at the box office there was no way Disney was going to get behind a costly sequel that wasn't profitable. Whether it was the mid 90's or even today Disney is still taking a huge financial gamble on this sequel. Sure, it's become a cult classic over the last 28 years but most kids today have never even heard of it or find it to be a relic of the past. They might be impressed by the special effects and all but like the remake for Clash of the Titans the only appeal to draw big attendance at the box office is overblown video game FX for the Xbox ADD generation.

I have to disagree that TRON 2.0 was a "horrible, horrible" game. I know that a lot of consolers hated the console version of the game but the PC game definitely had it's strong points.

Granted, I was not a fan of the plot from Day 1 but a lot of in-game mechanics worked very well (The "Alpha-Beta-Gold" abilities, the "Permissions are the new Keys," etc.) & the levels were varied enough in style so that you never got the sense of, "Oh... We're back here AGAIN."

I'll admit that that TRON 2.0 fell into far more FPS cliches then I would've cared to play.

I'm never a fan of "Boss Battles" which essentially pits you in a FPS gladiatorial arena with some overpowered enemy that you have to outsmart in order to win.

Finally, I had no interest in playing the light cycles. I understand why the designers tried to initially integrate the light cycle sequences into the game but, to me, it was really jarring & took you out of the game more then kept you into it.

Having written all of that, I was really surprised by how much the game got right more then it got wrong. The abundance of & integration of soft RPG elements into the game definitely elevated the mechanics of the game over your typical FPS. In a backhanded way, I'm almost a little disappointed that someone didn't have the moxie to go all the way & develop the title into a full modern RPG, like that of Oblivion.

This game could've emerged as much a cult classic as the film had Disney simply followed standard game industry practice & released the SDK into the public so that the public could've modded the game to their hearts' content. Even for back then when TRON 2.0 was first released, an SDK release was standard operating procedure for most FPSes. Note to game developers: When will you learn? When you don't release an SDK, that signals to the community that you have no confidence in your game. When a developer has no confidence in their game, why should the community have any confidence, either?

Here's to hoping that the TRON: Legacy tie-in game has learned the mistakes of it's predecessor. Unfortunately, I'm not expecting that lofty goal to be met.