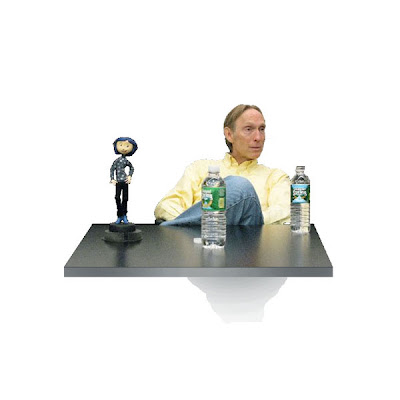 Pixar is known as a director driven studio, but when you think of those directors it settles in to Lassetter, Stanton, Docter, Bird primarily...

Even Bird was brought in to shake things up with that idea he had called "The Incredibles," and we all know how badly that worked out. Now Lee Unkrich is about to join those ranks later this summer, but who else could take the reigns of a Pixar film and deliver something fantastic, yet original? Is it time to shake things up again now that it looks like there are sequels all around for the next few years?

Well, it seems that a certain animation director has been seen in Emeryville lately and some are wondering is he coming to the Lamp? Could Henry Selick, the director of "Coraline" be planning on shaking up Pixar like Bird did? He could just be visiting friends, but he may be interviewing for a job. After all, even though he's known for stop-motion animation he's not a stranger to CG animation. If you haven't seen his short, "Moongirl" I'd suggest you take a look at it because that could be a preview to his future.

Wait wait wait, are you saying Incredible wasn't a good film? I thought it was really good

lol Darian, you are funny.


This would be a good move, help bring the studio back after the next few stale years.

Something akin should be done over the other studio.

Didn't Laika fire all of their CG people in favor of stop motion? Seems to me like this would be good reason for Selick to stay there.

The industry is truly a revolving door. Romano and Pinkava already moved from Pixar to LAIKA. Now Selick is possibly moving to E-Ville?

That had better be sarcasm, Mofo!

I agree, you think the incredibles was bad!? That is hands down my favorite Pixar film!

This would be very exciting news!

Darian--I'm pretty sure that Honor is being sarcastic.

Wow, didn't include Stanton, who's Pixar films are arguably much better thand Doctors.

And I really hope Selick doesn't join Pixar, his films fall apart in the third act. And I've heard he's an extremely hard man to work for.

If you've been reading this blog for a while guys, you know that "The Incredibles" is my favorite Pixar film...

Please read a few post about Pixar before you cast blame, k? Sigh...

Also, it's noted that I left off Stanton as part of the Lamp's quad of directors. That has been corrected.

This is interesting, but it may turn out to be a social gathering.

We will find out soon enough...

"Please read a few post about Pixar before you cast blame, k? Sigh..."

Hang in their Honor. There will always be a few comments here and there from newbies. The Internet can be a harsh mistress.

I sure hope not, it'd be the first Pixar movie I didn't like.

Hey can anyone tell me why Lou Romano left Pixar?
Was it creative differences? Did Lasseter not let him direct a film?

He seemed to be doing so well there with the success of Up and all.

Stant's films are not better than either Bird's or Doctors. They're fine, but emotionally dry.

And Lee Unkrich has directed 2 films at Pixar already. Toy Story 2 and Finding Nemo, when Stanton couldn'g finish it on his own.

Laika is losing a lot of it's crew. They cannot get any distributors for their films. Everyone knows Selick built that place and once he left, so did their interest. I doubt anyone's serious, as why would they hire 2 people who got fired from Pixar?

"He seemed to be doing so well there with the success of Up and all."

Romano apparently quit long before Up was complete. I'd love to know why, too.

But we're lucky the films Production Designer Ricky NIerva (who worked on the film for almost 6 years!) created the look of the film and made the film too.