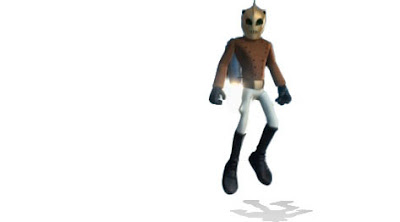 Joe Johnston has gotten a lot of ink on this website lately...

With the 20th anniversary of "The Rocketeer" and his take on "Captain America" coming out next month, we've had more than normal to say about him. I mentioned in my earlier post about how it's be nice to see a sequel/reboot. Even an animated series would be nice. Apparently I'm not the only one thinking this. So I thought you might enjoy this bit of Rocketeer love from French animator John Banana.

Maybe a smart Suit could get an idea watching this...

Maybe I am a exception, but I really like this movie adaptation. I never understood why there are a perception so negative about The Rocketeer. I think that it's charming and fun. Oh, and Jennifer Connelly is in the movie!

I loved the comic and felt a lot of it was put into the film...

But it still felt like it was lacking something. I think it could have used a another action scene or two. But I was hoping for a sequel that never came.

Same feeling I get from "Green Lantern" I think...

Honor, you have to see this, made in honor of Rocketeer's 20th anniversary, via Gizmodo:

Nah, Rocketeer is way better than the Green Lantern. I went to screening at El Capitan last week, what an awesome experience. Perfect theater to see The Rocketeer. Hoping for a Blu-ray or at least Special Edition DVD with behind the scenes footage with Dave Stevens. Fun movie from Disney's best era for movies.

"Honor, you have to see this, made in honor of Rocketeer's 20th anniversary, via Gizmodo:"

Dude, did you even read this post? That is what it was about. He even put a link to it. Please READ the post before commenting and showing that you weren't even reading what was there. Sign.