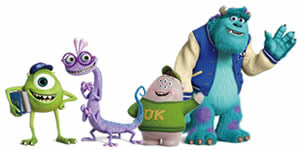 The Lamp's latest film was number one at the box office this week...

"Monsters University" beat out a horde of zombies and an Alien from a dead world to be on top in theaters over the weekend.  And if you've seen the film then you know that it didn't blaze the trail with a new concept, just an old fashion story that's been told many times before.  But this time it was told by Pixar.

If you've seen films like "Revenge of the Nerds" or "Real Genius," then you've watched the premise of the film.  But that doesn't mean it's not worth watching.  The way the crew up in Emeryville take the beloved characters from the original film and transfer then into the setting of a college party film is an entertaining little jewel.  It was wonderful fun and a textbook example of why any film from Pixar is better than ninety percent of most live-action films.

John Lasseter and his crew know how to tell a story.  They can take a simple tale and fill it with emotion and narrative that brings characters to life.  They truly live up to the word animate.  The stories that they invite us to watch are compelling examples of life that audiences connect with.  And even though some might decry the fact that this is an unnecessary film, it's not.  So long as it's enjoyable, there is no reason it shouldn't have been made.  Going back to the world of "Monsters Inc." to see the characters we all fell in love with is only part of the beauty of rediscovering this unique world.

If you want original, then the next couple of years will be a feast.  From what I've heard from the Bothans, "Inside Out" is shaping up to be a very original animated film.  And then of course, next year we have the Lamp's take on dinosaurs which I can't wait to see.

And you'll get a glimpse of it this fall...
Posted by Honor Hunter at 1:27 PM

Loved the film! Light, funny and full of heart and honesty. Really loved the ending! No short cuts in life.

Waiting for Pixar to wow me again. It's been a long time.

Count me as one who was hesitant at first, (another sequel/prequel?), but having seen the film am relieved to discover Pixar in true form. The movie may not have the startling originality of Wall-E or Up, but it has no less heart, soul, and intelligence, or even creativity for that matter. Interesting side note, a friend and I also saw Man of Steel the same day , and we were AMAZED at how much more of a grown-up movie Monsters U was compared to the big-budget "dark and gritty" Superman retread.

Haven't seen it yet, but just a few comments on what has been said: Going back to the world of Monsters Inc. to see the characters that we ALL fell in love with? Not so much for me, but that's just my opinion.

Wall-E and Up original? Maybe, but I still think that films like Despicable Me and the Lorax are better.

Pixar's take on dinosuars? Let's see, what has been done already - Land Before Time, a saccharin tale about dinosaurs migrating. Jurassic Park - a scary story about dinosaurs in today's world. Dinosaur - an inane film about I don't know what. Ice Age - a dinosaur-esgue story that started out great but got worse in the sequels, but explored nearly every dinosaur-esque premise. I just hope they go more the Ice Age route than the Land Before Time route.

I haven't been at all satisfied with any of the Pixar sequels. I believe that, while Disney hasn't had a direct hand in the development of Pixar's output, they probably have pushed then into doing sequels.

Pixar needs to go back to creating unique one-off productions. Tell Disney to stuff it when they ask for any more sequels.