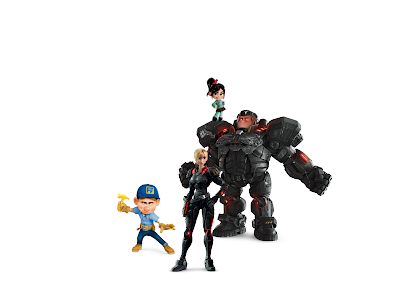 And here we have another game cancellation from the Mouse...

Only it's a game that never was intended to exist.  If you saw "Wreck-It Ralph" last year then you remember the gaming environments that Ralph got to experience.  From the Donkey Kong-like world of Fix-It Felix Jr. that he inhabited, to the Mario Cart feel of the sickeningly sweet world of Sugar Rush, to the Halo inspired world of Hero's Duty.  But there was another gaming world that didn't make the cut.

Extreme Easy Living 2, a fictional game that appears in a scene that audiences never actually saw, it was never actually rendered because it was cut well before that process could begin.  Here you can watch an animatic of the exclusive scene courtesy of Total Film (their exclusive, not ours).  It has a unique charm to it, but I agree with the cut.  It didn't add anything else to the story and would likely have slowed down the story.  Something that really wouldn't work for the ADD minds of the film going audience.

You know, the ones that would actually be the audience to play these games...
Posted by Honor Hunter at 10:39 PM

It's on the Blu-ray as a bonus feature.