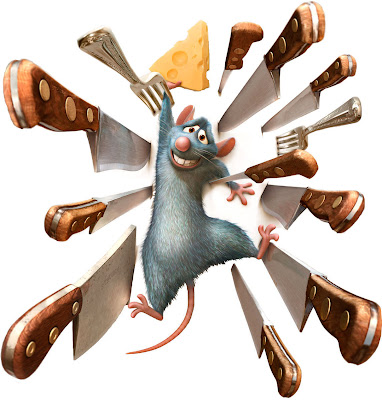 While the box office of "Ratatouille" fell short of what Pixar's last film "Cars" made, the film has more than made it up overseas... The film was around the $280 million area last week and is just opening in several territories like Italy. Before it's all over the Brad Bird film will easily cross the $500 million mark... that's half a billion dollars, my fellow Disney Geeks/Fans. Remy happens to be a huge hit in Europe right now, despite all the negativity from various people around the Net. And even though the Little Chef hasn't stirred up as much green here in the states, racking up over $200 million in domestic sales is far from a disappointment. This Rat's a star... don't believe the haters.

Uncle John, or as I'm starting to call him "The Old Mousetro" has a great deal of credibility with Iger and crew and this will only help when it comes to new films(animated and live-action btw) and new attractions around the Disney World. Starting November, the dawn of the Third Golden Age could begin and from what I'm hearing from a few animators... next fall's "Bolt" will add bite to Lasseter's stature within Burbank and Glendale.
Posted by Honor Hunter at 3:58 PM

It's already at $500 million as of this weekend:

So much for that "downward trend" the naysayers have been saying about Pixar. I guess they'll always have the domestic box office to hold on to though.

How is "Bolt" coming along? Can you give us any hints?