A Guide To The Kingdom (Chapter One)... 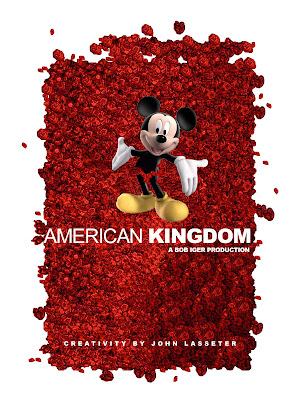 Seeing as how we had a guide to the terms used here at Blue Sky Disney, I thought I would take this time to coin a few metaphors for the Mouse that everyone loves. Everyone knows what we call John Lasseter's headquarters in Glendale, where he leads his troops against the dark forces of beings known as Suits... the Glendale Kingdom, right? Well, I figured since that's only a part of the world we call Disney I'd lay out the territory and people in the "Disney Kingdom"... sort of give everyone their title in this little fairy tale...

Once Upon A Time... there was a Kingdom.

Now you can't have a kingdom without a king...

King - Bob Iger, he that came to the throne after the former ruler, King Eisner, lost his crown after his subjects lost confidence in his leadership. King Iger is new to the thrown, but has so far shown a remarkable ability to govern wisely, and good.

Beneath him, a lineage of royalty...

Prince - John Lasseter, the true bearer of the phrase: "One day my Prince will come...". Prince Lasseter was banished from the kingdom many years ago by corrupt leaders that wanted to keep power to themselves and didn't like anyone rocking the boat. Prince Lasseter rocked the boat too much and was banished to the north for many, many years. He only returned to the Kingdom after many years up north building his own, new land... the Principality of Pixar.

Prince - Dick Cook, the Prince responsible for the stories of the Kingdom. Prince Cook is a much beloved figure known for his friendships throughout the land. Prince Cook is currently training a youngling named Oren for a bright future within the Disney Kingdom.

Prince - Jay Rasulo, the Prince with power over all the kingdoms. Installed by the King Eisner several years ago as one of the final mistakes of the last monarch. Prince Rasulo, like Prince John of England is not the most popular leader in his land and given his policies not very understanding of his subjects. Prince Rasulo has several underlings that he controls, but his main rival is the favored Prince Lasseter, closest to King Iger.

Prince - Ed Catmull, a close confident, friend and ally of Prince Lasseter. Prince Catmull is a military genius and master planner who works with Prince Lasseter to defeat the enemies of creativity and hold back the forces of Mediocrity, the evil dragon.

Princess - Anne Sweeney, a formidable Princess that rules over some mystical place called "Disney Media Networks". Talented and beautiful, the Princess handle much of the media and entertainment in the Kingdom.

Lord - Ed Grier, the ruler of Disneyland, the original Kingdom of the Mouse... although he's the Lord, Grier is a mysterious leader that is rarely seen around his lands. Perhaps he's a figurehead ruler? Could there be a power behind his thrown?

Lord - Michael Mendenhall, a faltering Lord that was one of Prince Rasulo's underlings. Prince Rasulo had intended on installing Lord Mendenhall in charge of the wizards in the deep dungeons of WDI... sadly for him, thankfully for us the Prince Lasseter made an appearance to save the day. It is widely believed that Lord Mendenhall was secretly a servant of the dragon, Mediocrity.

Lady - Meg Crofton, the ruler of Walt Disney World, the most well known of the Mouse's Kingdoms... ruled by the enigmatic leader Lady Crofton. Not much is known about her, much is needed to be known before a final decision can be made, but she is one of "The Anointed" a group that Prince Rasulo has surrounded himself with. Several Subjects believe that, like Lord Grier, she is a figurehead for Prince Jay's scheme.

Duke - Don Hahn, Don Hahn, a beloved member of the Knights that has gone off on a quest for the Holy Grail of Sanity... may he return soon.

The protectors of the Kingdom, the nobel Warriors...

Knight - Andreas Deja, a brave and noble knight, fond of the old ways and not a follower of the new age religion in the Kingdom known as CGI. Sir Deja is a defender of the virtues that founded the kingdom by the first King, our fallen leader, King Walt the 1st.

Knight - Glen Keane, a famous and revered knight that has long been known for his championship of the Kingdom... of late he is a follower of CGI, perhaps later he will return to the Old Order.

Knight - Ron Clements & John Musker, a pair of knights that helped save the Kingdom from demise years ago... heroes to us all. It is rumored that they will grace our presence again soon...

Knight - Brad Bird, a knight from another kingdom that has recently joined the Disney Kingdom. Sir Bird is a valiant knight capable of besting the... uhm... best of them. He is known to have slain several demons, the most famous of which is the evil demon Bland and his companion, the demon Boring.

Knight - Andrew Stanton, a knight of the most special breed. Sir Stanton is perhaps one of the most eloquent and politically astute members of the knighthood. He is currently on a mission constructing an offensive device, called Wall-E to help defend the Kingdom.

Knight - Pete Docter, a great friend of Sir Stanton, Doctor is said to be the brethren of Stanton and followed Prince Lasseter in "The Order of the Lamp". Sir Doctor is currently on a mission seeking an old man in the wilds of the forest... no one knows much about this quest, but if he is on it, it must be of great importance.

Deep in the bowels of the Castles of the Kingdom reside the WDI... feared and magical magicians that create wonders to help the Disney Kingdom thriving...

Wizard - Tony Baxter, a most famous Wizard that is responsible for the magical defense of the Disneyland part of the Kingdom.

Wizard - Tom Fitzgerald, a Wizard that relied too much on illusions instead of real magic. His style clashed with that of Prince Lasseter and he has been sent on a quest in the land near Wizard Rohde resides... his quest is to find the magic again, so that he may return...

Wizard - Bob Weis, a Wizard that lost hope in the Kingdom and fled to the jungles to establish a nation in Orlando, whatever that is. Recently returned at the request of Prince Lasseter, Wizard Weiss has the great task of turning the ugly land of DCA into a beautiful oasis capable of rivaling the lands of Disney and EPCOT. May Walt the 1st spirit be with him...

Wizard - Marty Sklar, a grizzled and wize old wizard that now resides as a mentor to the rest... his following love him for embodying the sprirt of Walt the 1st, whom Wizard Sklar actually served.

And last, but most certainly not least...

Pope - Steve Jobs, the man with Iger's ear. Now he may not be King, but when Jobs speaks... the King's ear perks up. To not do so would not be wise. Owning more than any other person does have it's perks. Running one of the most successful companies that you rescued from the brink of failure also has an allure... kind of like the Pope having the blessing of god and being the Vicar of Christ.

There are certainly many others in this Kingdom, but these are the primary players... who will live to slay the dragons and battle the forces of evil? Some will pass, many will go on and the all will be remembered...
Posted by Honor Hunter at 4:34 AM

Great article. Very funny. I love the graphic. Mickey on a parody of the American Beauty poster!

Will Wizzard Fitzgerald find Magic in the land of Florida, or destroy it?

Ha! Best. Post. Ever! I had to forward it to every hardcare Disney fan I know...

Good article, but you left out a position for Roy Disney. perhaps something like keeper of the Kingdom?

Notice the article said "Chapter One"...

Roy and others could show up later.

Oh for pete's sake it's THRONE

Nice perspective on the Disney Company.

Bow...which character has a Mickey Mouse scar on his/her forehead from getting rid of He Who Must Not Be Named?

Curious, did you mean to say Lasseter works out of Glendale? Because Disney Animation and Disney Studios are located in Burbank. At any rate, fun little article.

You should go back and check the articles I wrote about the "Glendale Kingdom"...

But Uncle John spends a growing amount of time over at WDI and they will soon be building the new home of WDAS there as well as the fact that all Disney animation except that in the Frank Wells building will be over there. Lasseter is consolidatiing it all(or most of it) under one area... that area is in a business park in Glendale.

Walt Disney Animationn Studios will be moving over to Glendale in early 2009 near WDI and DisneyToon Studios is over there. Both are now under the authority of Ed Catmull and Uncle John as you call him. The only one that will be left is Walt Disney Television Animation in the Frank Wells Building. If the other Disney Animation Units thrive under their leadership expect more control from Glendale.