The Real Reason "Newt" Got Canned 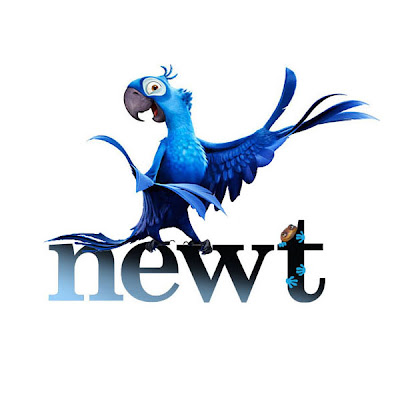 A lot of people have bemoaned the loss of Pixar's "Newt" film when it was canceled last year...

Many Pixar fans were wondering why they would do something like this. The rants against sequels came up and several people wished that the film would be restarted. What most didn't pay attention to was the fact that Lasseter and crew took Gary Rydstrom's film debut and canceled it were the many similarities it had with a competing project: Rio.

The project from Blue Sky Studios(makers of "Ice Age") was about the last male of a species of bird that has to mate with the remaining female of the species. This along with the part of the story where they break free and go on a journey was considered too close to their own story. So much so that there was no way to retool the story unless it were to become something completely different than what they put into production.

Lasseter and Ed Catmull did not want another situation like what happened with "A Bug's Life" and "Antz" back when the Lamp was still new to the biz, having made only one film yet. And this time, they'd be coming after that film. This would look like they were deliberately copying Blue Sky, which Pixar had never ever planned or even wanted to do. They take pride in making films that have a particular stamp of individual creativity and the last thing John wants to be known for is ripping off someone else.

Well, a couple days ago, the second trailer for "Rio" came out and if you watch it you can clearly see the similarities that would have been compared to Pixar's own film. It shows how uncomfortable it would have been for the company to proceed forward with this project; investing tens of millions of dollars on something that the public could turn its back on since it had saw the film already. Rio, on the other hand, moved forward and will be released in April of next year. And Blue Sky's project looks to be a well crafted, fun story. The film looks breathtakingly beautiful and very entertaining. As for Disney North; there are plenty of projects in the pipeline in the coming years to enjoy.

Just none about the last male newt that existed...
Posted by Honor Hunter at 11:10 AM

Da*n you Rio. Newt would've been great. Instead this lame-looking movie about you comes in its place. Da*n you.

Hope Rydstrom has something else under his hat.

I'm afraid that's not good enough for me. Pixar has earned enough goodwill with the audience that they don't need to second-guess themselves in this way and compare themselves to what everyone else is doing. If "newt" had a solid storyline of with its own unique characters and emotion, that should have been enough. Pixar is quality, and quality always wins out. Back in 1998, "A Bug's Life" almost doubled the gross of "Antz". The situation does remind me a little of "American Dog/Bolt" though, since Lasseter allegedly pulled the plug on the original concept because of its similarity to "Cars". And I'm still not happy that they're making a sequel to "Monsters, Inc."

You say "And this time, they'd be coming after that film."

"ANTZ" actually was also released prior to "A BUG'S LIFE." Nearly two months prior.

Honor, thanks for your kind words regarding Rio. Initially, I was really disappointed that Newt was cancelled, but I completely understand why. Rio was in production long before Newt, and it just would have made Pixar look bad.

Personally, I think Blue Sky is producing some of the best animation out there, and Rio is no exception. They have such a wonderful grasp of squash and stretch, and their characters look like you could just reach out and touch them. Pixar is great with story, but their animation is flat compared to what Blue Sky is doing. Granted, Blue Sky wasn't always this good, but they are now taking full advantage of the medium. Their recent films, in terms of just the animation, are masterpieces, with Sony running a close second.

Darrell, I think you need to get a clue about animation. Instead of blindly drinking the Kool-Aid when it comes to Pixar, I would start immersing myself in all kinds of animation. I hate to break it to you, but Pixar is not the end-all, be-all when it comes to animation. I get really frustrated with guys like you and Mike from The Pixar Blog because you seem to just watch only Pixar or Disney movies, and that's it. Mike refused to see How To Train Your Dragon until recently, and he liked it. How about that? A movie not made by Pixar might actually be... (gulp)... good. Granted, Mike gets all kinds of free paraphernalia from Pixar, so I can understand his blind allegiance; he's basically been bought. You, on the other hand, need to open your mind to new, non-Pixar experiences. Start with Mary and Max or The Secret of Kells, and work your way back. There's a wealth of great animation out there not made by Pixar, and it's about time you educate yourself.

Keep up the good work, Honor!

Why didn't Pixar just decide shelve newt instead? And has anyone heard of Liongate's Alpha and Omega?

WOW. I just saw this trailer while watching "Voyage of the Dawn Treader," and the very first thing that popped into my head was "Newt!" On that note, I also thought of "Newt" when I was watching the trailer for "Alpha and Omega."

Because when you think about it, it's not just these movies that sound similar to "Newt." Granted, I don't know where they planned to take the story, but as much as I hate to admit it, the whole "unsophisticated guy falls for sophisticated girl" has been done before many, many times. It's even being used for the latest Disney movies, as we saw with Tiana/Naveen and Rapunzel/Flynn. So, as much as I'd love to see Pixar create something original out of the romantic comedy genre, it's probably for the best that they aren't releasing "Newt" for the time being. They'd have to change the premise of the story first in order for it to work.

The only Newt I care about was in Aliens.

Okay, i get it, it's the holidays it's the lull season, but I read and knew at the time Newt was first "shelved" that it was because Rio and Alpha & Omega we're being released both of which had similar plots to Newt.

I'm sorry Honor, but I do not approve of this post.

(not that you need my approval, it's your blog and you can write whatever you want). Happy Holidays.

I can see why it would get canned. The best doesn't want to look like it's copying the second best.

however, I would hope and pray that newt would make a rise back from the can, and someday see the light of production day, be that some years from now, because I think it'd be a great story to tell, just....not right now.

Not to mention it's similar to that wolf movie Alpha&Omega also.

The plot is dumb anyway. Kids don't want a rom-com between animals that are suppose to have sex for their species; actually, no one wants to watch that.

Is that all it takes to shut down a Pixar production? Plan to release a similar story before Pixars? I think the industry just found a way to end Pixar's reign. Sorry but Rio doesn't do a think for me and I was looking forward to Newt.

Anonymous #2: You misunderstand me. I damned Rio because when I saw the trailer for it, it looked lame. In fact, I'm one of the oddballs who does like Dreamworks all along. And "Alpha and Omega" didn't look too great either when I saw the trailer. This is the reason for my negativity... NOT because I hate all other animated films besides Pixar which is the best.

It's a weak, easy plot for a story no matter who is doing it. I'm glad PIXAR ins't going forward. Honestly I never understood the moaning about Newt getting cannned. When I first heard the premise I thought it sounded more like a weak Dreamworks film than an original PIXAR story.

@Darrell: First of all, not everything has to be made by Pixar. If they had to cancel a film, tough luck. Besides, they've had plenty of other great movies (Toy Story, Finding Nemo, etc.) And also, you can't base the greatness of a film by past productions. It's just unfair and biased. And FYI, Alpha and Omega isn't from the same studio as Rio anyways. Unless, of course, you're talking about plot similarities somehow. Either way, it's still unfair. Furthermore, you say Pixar is the best as if it were a fact. While I agree that Pixar is a pioneer in animation and has yet to disappoint, not everyone agrees. 'Nuff said.

I'm pissed because I heard about Newt way before Rio. Pixar could've made the story waaay better. Rio was ok but wasn't that great. It was a 7 out of 10. It was just missing something (adventure, all they did was try to fly). Plus I saw Newts concept art, it was ...just amazing! Beautiful! I also like lizards waaay more than birds to be honest. Pixar is just way better and they could've made Newt really awesome, if it wasn't for that stupid Rio! I also remember hearing about it in 2008 and got excited waiting for it but then.... WHAT THE F***!! I just hope someday maybe even in 10 years they'll make Newt again. No ones gonna remember Rio by then. I'm sorry, it just wasn't that great of a movie. HERES HOPING THAT "NEWT" GETS PUT BACK IN PRODUCTION!!! Really it shouldn't be too hard to change the story alittle.

The birds in Rio are endangered, but not the last of their species. Bad, bad article.