Out with the old, in with the knew... 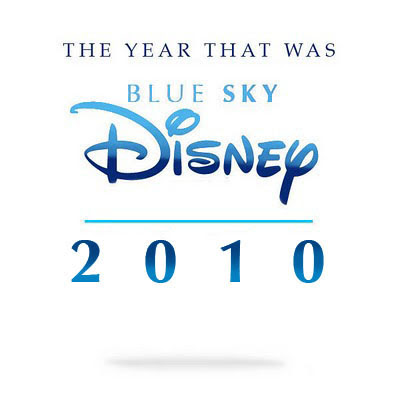 Another year ends at Blue Sky Disney and another decade closes...

A lot of things happened in 2010 and it's time to do a recap of some of the main headlines. Let's take another walk down the months and start in where everything does: at the beginning.

The Walt Disney Studios got new management at the beginning of the year when Sean Bailey joined Rich Ross to guide the future of Mouse films. I enthusiastically supported this and feel that Sean is one of the good guys. He's someone that gets it and seeing him as one of the two most powerful film Suits is a message to fans that we can expect better days ahead.

Principle photography began on Walt Disney Pictures' 2012 blockbuster, "John Carter of Mars" almost a year ago and I hope that this project lives up to its potential. It could be Disney's answer to "Avatar." Although many that have never read the classic books could think that the Mouse is ripping off James Cameron, but actually it's the other way around.

Blue Sky was the first to report to you about the problems that Brad Bird was having getting the script for his dream project, "1906" made. Eventually, Bird realized he was going to have to prove to suits that he could make a live-action hit so they would trust him with the large budget his period disaster film would require. I guess making hundreds of millions of dollars in animation doesn't count to these guys? Anyway, the best "Mission: Impossible" now awaits us.

Anyone who read Blue Sky knows I loved "Prep & Landing." Back at the beginning of 2010 we broke the news that WDAS is thinking of turning this little television special into a theatrical feature, by way of "Winnie the Pooh." Confused? Read the post and you won't be.

Burbank was all worried about the "Princess Problem" that was perceived after the disappointment of "The Princess and the Frog" at the box office. We looked into some of the perspective of those in the Michael Eisner Building and the Hat Building.

You may not remember it, but Blue Sky was the first to report the name changing of "Rapunzel" to the more boy appealing "Tangled" back in February of last year. Amazing how a fear of princesses disappears with success, right?

The lack of a strong development slate caused many artist and animators to pack their bags and head for other work once the production of "Bolt" and "TPATF" was done. Sadly, many talented people that I've always admired have moved on to DreamWorks Animation as well as other studios. Hopefully with the success of that long haired girl we can stop worrying about the entrance to the Hat Building being a revolving door.

I poked fun at the decision of the Suits to change the name of their film to attract more male demographics in this post. I wondered what other Disney classics would be called if the names had been co-opted by the marketing department of the Mouse.

We broke the story about John Lasseter taking over the direction of "Cars 2" in early 2010 and gave everyone a peek into the problems that the Lamp was having with this sequel to a coming theme park land.

I love me some Pulp and hope that this production gets filmed even though it's not a Disney one.

Blue Sky was the first to tell you about fact that Henry Selick was working with Pixar on something, but not really sure yet what it was.

An early draft of "Tron Legacy" was reviewed on Blue Sky Disney by our very own Tron Unit and he didn't like it. Not that he liked what was actually filmed, but it's interesting to see what was different from what showed up on the silver screen.

Not bad, and we're not even through a quarter of the year yet...
Posted by Honor Hunter at 7:30 AM

Thanks for another great year, I really appreciate what you and your entire BSD team does.

Interesting! Thanks for the recap and I look forward to the rest.

"John Carter of Mars. It could be Disney's answer to Avatar." Didn't the same person say that about Tron Legacy?

So far, only James Cameron can top himself.

I don't know, John Carter could actually get pretty close to Avatar in terms of special effects...

What's the situation with Selick ? Does his new studio, Cinderbiter, is some kind of a new brand for Pixar, or what ?