Good News From The Grid...

Number Three could possibly be... 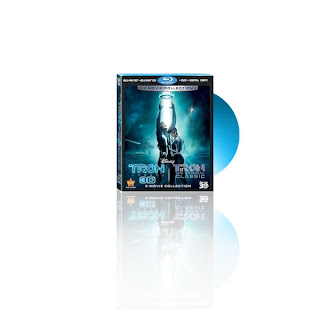 It appears that you Programs got some great news this week...

The Blu-Ray/DVD for "Tron Legacy" was a big winner. The sales were good enough to make Disney Suits take notice. Now of course, they're going to have to continue to be good, but so far it's impressive.

The sequel to "Tron" was number one, but it was so with a huge 68% of sales and outsold the DVD two-to-one. The third film in the series hasn't been green lit no matter what anyone has told you, but business like this makes it more likely. If you haven't yet got a copy and plan on it, may I suggest you depart with some green. It may make the difference between a two and a three.

So a lot of people seem to be buying that sad excuse for a movie - where exactly is the good news?

Well, even though you have no taste there are many others that do.

@anonymous: "Taste" - yeah, except that the movie itself is stupid, loud, annoying and shallow - one could also say: tasteless...

I don't really care if there's a TR3N for not.

But Tron Legacy is certainly NOT a sad excuse for a movie!

"the movie itself is stupid, loud, annoying and shallow - one could also say: tasteless..."

Are you describing the movie or yourself???

Reflection is a very hard thing to take, I know..

I will never understand why people act as if they had created a movie themselves or as if they were on the studios paylist - I happen to dislike the movie, and I´m by no means alone (it´s at 49% at Metacritic, which is pretty pathetic) - but I did not insult anybody who loves it - I just think it´s a very flawed piece of entertainment. *I* do distinguish between movies and people, so don´t ask me what I´m talking about, the movie or myself... it´s you who feels insulted by a comment that was merely about a movie - talk about reflection...

Spokker's back. Itching for a fight.

Oh please, perfect or not, Tron: Legacy is not "tasteless." "Tasteless" seems to imply it's morally disgusting in some way. There aren't enough muscles in my eyes to roll them as much as I'd like to at that comment.

Tron: Legacy is fine. It's a movie. It's for kids, by the way, though many adults like it. If you hate it so intensely that you have to say something about it here, you really need a life. You're taking effort out of your day to rail against a PG Disney movie. Haha.

I, on the other hand, am taking time to stand up for something I enjoy. Time well spent, in my opinion.

Seriously I don't think I've seen any opinions on Tron Legacy as bad as yours. You think the movie is "tasteless"; that's exactly what I have to say about your taste.

Unless of course you got caught in the GRID and were amputated while you were in there.

While I completely and utterly disagree with "Jones", I think he just used the adjectiv "tasteless" because he was accused of having "no taste", just because he did not enjoy T:L. I would not say he was "railing", critics have said much worse things about T:L, e.g. Andrew O´Hehir:
"That's the culture we live in, where the once-proscribed Pleasure Principle has become iron law and where the recycled, bloated, fish-belly emptiness of something like TRON: Legacy carries boredom to extravagant new heights."
Now that´s what a call a rant!
And please,please: It´s not my opinion, I love T:L. I´m just quoting a critic.

For the second week, it fell to third place in BluRay and fourth overall. For the third week, Tron fell out of the overall top ten, possibly even for BluRay as well. And at the start of the fourth week, it isn't even on the map (BluRay is in the mid-twenties and fortieth place overall).

After two weeks of sales, this film fell right off the cliff. Compare that to other Disney films like Tangled, still going strong into its fifth week. I think the hope for TR3N getting made is fading fast.

The Blu-Ray IS the DVD really. It comes with both. I've seen the sales at my local Best Buy go pretty well. We'll have to wait for the final numbers to see what happens.