Remember, only Paul Pressler can start a theme park disaster... 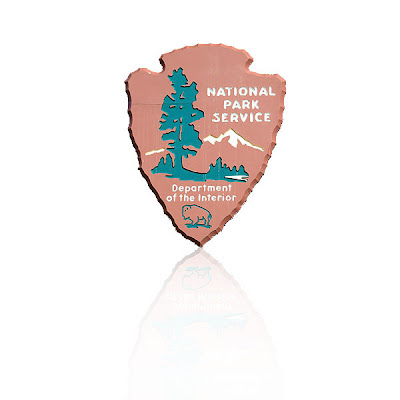 Many have noticed that the sign for DCA's Hollywood Pictures Backlot was taken down earlier in the week...

Yes, before long the branding of the area will move over to its new name, Hollywood Land. Signage and the Red Car Line will be the majority of the changes for next couple of years. We'll have to wait for a few years before the rest of the area steps back into the Golden Age of Film (40's).

And speaking of the Golden Age, HPB isn't the only place getting a name change. Maybe it's better if I say Golden State instead of Age. Because when the Second Gate is rebranded, the GRR and surrounding area won't be known as GS anymore. The new name will be "Grizzly Peak National Park" for anyone entering the area from Condor Flats to right before you step into the Pier.

As we've mentioned before, the area around the Grizzly River Run is going through a gradual transformation that will evolve over the next few years. The mistakes of the park were less dramatic here and the need to have a large scale project is also unnecessary as well. We have known that the wooden area of the park was going to slowly remove the modern elements in return for a 50's national park atmosphere, most didn't realize the name would become part of that as well. Slowly, the second park becomes a destination, not a delusion.

As far as I can tell, the arch and elephants will be removed, and the street will just flow from Carthay to the Hyperion like a real city street.

I'm sure they'll use subtle wayfinding, like period-specific street signs on lampposts to identify the area, but a large "Hollywood Land" archway entrance won't be part of the new design.

More of a seamless flow, rather than an abrupt transition.

If there will be a new e ticket beyond the Tower of Terror themed to Hollywood of the past, we may see the elephants reused there.

Thanks, Honor. Sorry if this is a repeat, but are you aware if the plan is still in place to carry the national park theme through Condor Flats?

The planned changes still are not nearly enough to transform this "theme park" to a destination. Furthermore, I do not understand transforming the GRR area without overhauling the "off-the-shelf" river rapids ride. The thing is a glaring example of what they did wrong at DCA. They spent several million dollars to build a themed mountain, but then fill it with a ho-hum attraction devoid of any of the Disney trademarks, theming or surprises. Yet they still do not acknowledge this and update everything around it. Looks ths WDC is doesn't get it.

Having been to the parks many times over the past few weeks, fans are really excited about the new additions.

As for GRR, it was the best themed area in the park when it opened. THAT is why there isn't as much work done to the area. And it is not an off the shelf attraction. Not in the same way that Mulholland Madness was. That was nothing more than a mouse coaster. There are basic components that the rafting adventure has, but almost everything else is original and designed rather well. Most people riding it would disagree with you. The only thing it's lacking are AA's. Which are coming. So a couple years from now, the only thing that has prevented this from being an E ticket, instead of a D ticket will have changed. I look forward to that.

"Sorry if this is a repeat, but are you aware if the plan is still in place to carry the national park theme through Condor Flats?"

Did you not see this?

"The Golden State will start to occupy and transform the small Condor Flats area of the park over the coming years."

Perhaps you should read the WHOLE article before commenting?

No Kazim, you don't get it... adn WDC doesn't get it! I worked at WDI in the ride engineering building where the misguided Barry Braverman and his stifled teams designed the park when it opened. I talked with the engineers every day. I heard their frustrations. I KNOW FOR A FACT that GRR is an "off the shelf" ride system, like 90% of DCA at the time.

As a (former) disney park fan, I completely disagree that is a decent ride. IT IS LAME when compared to MANY of the other water rides around the country, including other "off the shelf" systems.

(now you've really got my dander up)

Furthermore, there is NO EXCUSE for the way the WDC treats their employees and guests with disrespect and even contempt. I've seen that first hand EVERY time that I am at any disney facility or event for the last 15 years. WDC is NOT a good company and I will NEVER be silent about it after being burned so many times over the last two decades.

In the coming years the WDC WILL sytematically loose ground and eventually be recognized as the second-rate entertainment company that they actually are now. Do you want to know why I know that? Because they had the opportunity to license the Harry Potter franchise for they disney parks. However, in their ignorance and arrogance, WDC was unwilling to relinquish signatory authority to J.K. Rowling, so she declined. However Universal was willing to give her creative control. Do you know how that turned out... buddy?

It's kind of sad to think that a representation of modern California was rejected for a nostalgic take. (Yes, I understand the thousand reasons that had nothing to do with the real California). California use to be about innovation and progress; and now, just like "Tomorrowland", is a nostalgic representation about how we use to look at progress, which is not the same as capturing how we continue to move forward. Maybe this is the biggest missed opportunity. Disneyland could have made the change-resistent Boomers happy, where DCA could have stood for pushing the envelope.

Very true. There are many Imagineers who agree with your assessment. Imagineering has gone through several bouts of deterioration over the past two decades. Much of it was due to political infighting from within while those in control subverted many of the top creative people there, many of which have left.

Through the years there have been upheavals (Eisner gone, Lasseter brought in, etc) which many creative Imagineers had hoped for significant positive change. Unfortunately, they never truly came to fruition.

There is still a lot of potential at Imagineering, but there are still remnants of the old political system in control.

Hopefully, the future will change things for the better.

2.0 and Mr. Anonymous Ex-Imagineer, you're both wrong! DEAD wrong!