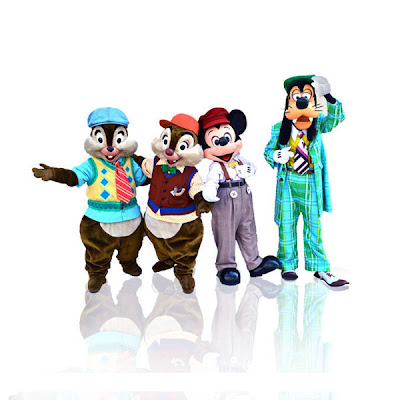 Three weeks from today DCA opens as a Disney Park...

I've said that various times over many, many posts in the past few years, but finally people will walk down the lands and get a true idea of what I mean. One of the great things that you will find is the thematic transition of characters in the park.

Buena Vista Street is the best example of this. Being as the areas represent periods of the California that no longer exists, or as I refer to it, Decades, the character theming is important to the presentation of these times. The official description of BVS is that it's 20's/30's, it it is essentially the Thirties. And the Carthay Circle Theater is the culmination of this narrative.

If you've ever been to Tokyo DisneySEA (and shame on you if you haven't), then you know how they are able to take classic Disney characters and project them into a time, a period and have them own it. From Mediterranean Harbor where Mickey and his crew are dressed in maritime/oceanic themed costumes, Lost River Delta where Donald and his gang appear to be 30's adventurers, or the American Waterfront where everyone looks like they walked out at the turn of the Twentieth Century.

And you can go anywhere else in that marvelous gate and see the way the characters work and how the designers get it. It is a textbook example of the "Disney Way", the very reason why the Moustro was so successful. And this is one of a laundry list of things that the original DCA failed at.

That will all change when you take a stroll down Buena Vista Street. From the Newsies-type singers on the Red Car Trolley, to the period band Five and Dime or the traditional characters you see walking around interacting with guests, or the Citizens of Buena Vista Street, it will all take you to a place that you've never been if you've entered DCA before:

And we will all have a much more memorable experience. One that should have happened a decade ago were it not for blind, bean counters. But better late than never, right?

21 days and what should have been, will finally be...
Posted by Honor Hunter at 9:02 AM

Any news on a similar redo of Walt Disney Studios Paris?

From the days when I stayed at the Disneyland Hotel and watched them turn the parking lot into DCA, to now…I am truly excited to watch as we finally get to put a big bow on this project. Not complete, but completely amazing. Cheers, Bob

Just so it's clear, not everyone hated DCA. I like it. I like the new one and the old one. They were exploring something that just didn't work the way they wanted it to. I'll never understand why people need to act like it was the worst thing in the world....

There were great plans on the drawing board but the CEO wanted a new park on the cheap. Big mistake.

Think DCA had unfair criticism? Imagine what Walt Disney would have said if he had seen this dump of a theme park.

Luckily it's going to create a far better impression on people in a few weeks, Floyd.

It's not perfect, but at least it is now a Disney Park.

So True Hunter - it is setting time and place and will pull you into place and location that you can't experience outside the park.

Question: Have you heard any "hints" towards second phase construction or maybe just new rides in the "new" lands?

It seems that they have quietly removed as much of the "modern" references as they could during "project sparkled".