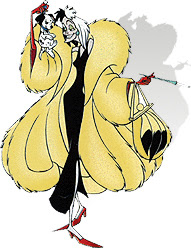 On this day, forty-seven years ago...

Walt Disney Productions premiered its 17th animated feature: "101 Dalmatians". The film begins using the Xerox process where they don't have to hand-trace every animators drawing onto cels anymore. Although considered a classic today, most people don't know that Walt Disney was not really that impressed with the final designs of the characters and let his opinion be known.

Still, the film showcased what has become one of Disney's classic villains: "Cruella De Vil"