Who's The Leader Of The Band... 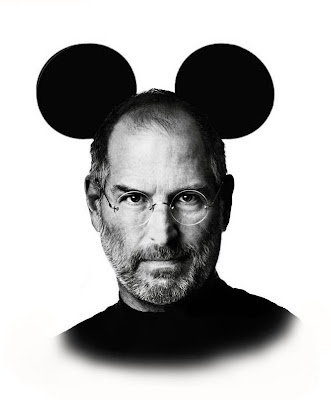 It's been a charmed year for the man that owns more Disney stock than any other person right now. Steve Jobs, leader of Apple, Inc. and prolific Disney Board member has been going through a very sweet period. The company's stock is worth about thirty times what it was just around the beginning of the decade and right now it seems as if Jobs and his company can do no wrong.

Jobs is considered a genius and visionary... he is after-all, half of the team that gave us home computing. Jobs in world reknown for his "Reality Distortion Field" that traps all who enter its path like a Death Star tractor beam. He was once considered a hot-head and too juvenile to run Apple. John Sculley fired him from the famous fruit company after a big battle with the Board in a power struggle to take back control of a company he was running. Steve Jobs spent years wandering in the jungle after that... banished from the company he helped create. He did a few things in between getting fired from Apple and then returning to Apple of course... he created a new computer company called NeXT, Computers which would one day be bought up and form the basis for Apple's new operating system: Mac OS X and he also bought a little division of Lucasfilm that you may have heard of called Pixar.

He's given a great deal of credit when people talk about Pixar and while he has helped it a great deal, he wasn't always so sure of the little computer graphics company. He didn't buy it with the intention of making films. He bought it with the intention of selling software, like the Renderman program that Pixar makes. That was Steve's original intent. He even tried several time early to sell the company considering that it was a loss for him. How would you like to be one of those people that turned down buying Pixar from him? After a period, Pixar's shorts which were testing the technology they were developing starting winning Oscars. This made Jobs confident enough in the Lamp to spend more, but he also got the company started trying to make a profit by creating commercials for several years. This became Pixar's bread and butter as they slowly tried to bring Ed Catmull's dream of making a computer animated movie. It was only after they secured a deal with Disney and the story started coming in that Steve realized what he had on his hands... but when he did, he went after it full bore and with the success of "Toy Story" he was even able to re-negotiate the original deal he had with the Mouse. While he ran Pixar he was very, shall we say... "unJobsian". Jobs is known as a very detail oriented micro-manager, but while CEO of Pixar he was decidedly hands off. He let Ed Catmull and John Lasseter run the company for the most part, but his support and strength during the Disney negotiations for films and the eventual acquisition were extremely valuable. The relationship that Jobs began with Bob Iger also proved strong and survived an attempt by former CEO Michael Eisner to stop the purchase of Pixar. He was decidedly against it and asked Iger and the Board not to do so and bring Steve Jobs into the company. Eisner knew that doing so would make Jobs the largest shareholder in the company with between six and seven percent. This would have made Eisner's close to one percent of the company's stock seem like nothing and put a man that Eisner had contempt for in control of a great deal of decision making at the company he just left. The Board didn't follow Eisner's advise, having remembered how he told them that after having seen "Finding Nemo" he thought it wasn't a very good picture. He then said it's failure or disappointment at the box office would help in the upcoming negotiations Disney was planning on for renewing their contract with Disney. Ouch.

While Bob Iger is definitely in charge at the Mouse, he has from time to time called up to Cupertino to ask Jobs for his suggestion when it comes to matters of business. Jobs has also expressed his opinion in the Boardroom on Disney's business strategy and they've listened for the most part. He is an intimidating figure... one with a record of accomplishment that is hard to argue with. His influence on the Walt Disney Company reflects many of the people that now run the company. While he has the ear of Iger, he is also a powerful friend and ally of John Lasseter and Ed Catmull. His backing of their direction of Walt Disney Animation Studios has helped Lasseter acquire more control over Disney's animation and has also affected the ability of Lasseter being able to pretty much green-lite most pictures at the division without having to get anyone's approval. It also helps the "Mousetro" that in addition to his power over animation and his ability to call on his friend Steve that he also has to only answer to Iger when it comes to wanting something done at WDI... the Imagineers over there are very happy with John Lasseter's suggestions and encouragement to dream bigger and Jobs is a big champion of creativity. Focused creativity... but creativity non-the-less.

There was talk early after Pixar was bought by Disney that Jobs would pull another move like he did at Apple. After being brought in he overturned the old administration and became the CEO within six months. It is the stuff of legend, when reporting how after being brought back as an "advisor" he started running things and telling people to do things behind Apple's CEO at the time. It's a testament to his persuasiveness that people around him at the time followed his direction even though he didn't actually have the power or authority to do what he did. That's one thing Jobs is famous for... getting people to believe in something, in him to do something that no one believed possible. Everyone felt he was going to force out Iger and be the new CEO of Disney. Even some of Iger's own Suits were taking bets that this would happen. But Steve Jobs didn't want to run Disney. He's having too much fun playing with his fruit company right now trying to change the world. He does exercise a lot of influence over the Board and his opinion weighs a great deal on the direction that it goes though. He's had a lot to say at the last few board meetings and he's a powerful ally to have, not to mention a powerful enemy to confront. But the worries that some had about him secretly taking over appear to be unfounded. As long as he believes in the direction Disney's headed, he won't interfere... much.

It's good to have someone as powerful as he for an advisor for Iger. Lasseter also knows that he's got an extremely influential motivator were he to get in an argument where he butts heads with Disney's CEO, unlikely as that may be.

Steve Jobs is a powerful asset to the Mouse. He may want to change the world, but it appears he only wants to influence the Disney world...
Posted by Honor Hunter at 5:11 AM

I think that Steve Jobs has matured quite a bit and he is enjoying his success at Apple.

He is a good influence at Disney and I am sure he is more interested in quality and his legacy than running it.

Thanks for keeping us in the loop!