How Much For A Room? 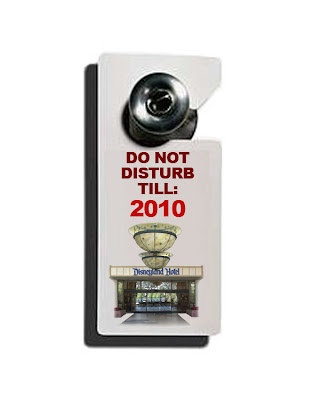 Twenty years ago today, the Walt Disney Company finally got hold of something even Walt Disney couldn't get. What was that you ask?

Wait a minute... it's the "Disneyland" hotel, right? How could they not own their own hotel? Well, if you're a normal Disney Geek/Fan then you may know this, if not, then please bare with me.

It is surprising to people when you tell them that the Disneyland Hotel wasn't always owned by the Mouse. You see when Walt Disney built Disneyland back in 1955, well he spent all the money he had on its construction. He borrowed against his home, he got his brother Roy to get other investors and then had the ABC Network inject a significant amount of cash in return for airing a new show on its fledgling broadcast called, ironically: "Disneyland." Getting a filmmaker like Disney was a premiere feather in their cap. That show, as readers of this blog may have read, is really the worlds first infomercial as it was a primary way for Walt to advertise the coming park that he was building.

Now he put all he had into this place, but he didn't have enough money to build a hotel. Walt knew that there were no hotels with a reasonable distance that would support enough people who came to see his park. So he asked his friend, Jack Wrather to build a hotel near by. Wrather reportedly refused. Disney told rather that if he would build a hotel in Anaheim, he would give him the right to use the Disney name on it... and any other hotel he built in California. And then he sweetened it more by telling Wrather it would be a 99 year contract. And so the Disneyland Hotel was born...

Wrather built a very nice 50's style hotel that was right next door to the theme park. After the 1959 expansion of Disneyland was completed, Walt instructed the Imagineers to draw up plans for the monorail to pull right up to the hotel so that guest could ride straight into the park. A couple years later he did just that. Wrather never built any other hotels in California with Disney's name on them even though he had the right to. And so it went for decades...

Now when Michael Eisner became the Top Cheese at the Mouse he started exploited the properties in Walt Disney World that had been underdeveloped and underused. He started building hotels on the property and planning new parks to take advantage of the enormous potential of the Florida Resort. As he did so, Eisner saw that there was more growth for Disney World's older sister in Anaheim and started WDI working on a plan to expand the property. He was surprised to learn that the Disneyland Hotel was not owned by the company... just like many of you. He had Disney representatives inquire about the property and the Wrather Company, which owned it was not interested in selling. At least not to Disney...

The Mouse soon learned that Wrather was indeed in talks to sell the property, but to a foreign company. Eisner didn't want this to happen and got the company lawyers at work on trying to find a way to stop this. It just so happened that the monorail contract with Disneyland was going to be coming up for renewal soon and Disney's Suits and lawyers used this as it's main leverage. They told the Wrather Company that the license renewal was going to be expensive. Much more expensive.

This through a wrench into Wrather's plans to sell the hotel... once the buyer examined all the books and would discover how costly it would be to have the monorail contract renewed it would be a very unattractive deal. Exactly what the Mouse wanted. Once they announced this the Wrather Company found that prospective buyers were going to be hard to come by...

Except for the Walt Disney Company.

And so they started negotiations to sell the Disneyland Hotel. But the deal that Wrather had been setting up wasn't just for the hotel, but also for his entire company. By the time the deal was done, the Walt Disney Company purchased the Wrather Company and got a lot more than just the Disneyland Hotel that it wanted.

Several properties that came with the first Disney hotel were the Queen Mary in Long Beach and a certain Masked Man that rode a white horse riding throughout the West searching for justice. Now with this out of the way, Michael Eisner began with his intention of expanding the property in Anaheim to a full resort like the one in Florida, albeit a bit smaller. He got the Imagineers to start designing what would eventually be proposed as "WestCOT" for the new Disneyland Resort. But while he was doing this, he also turned his attention to that new property the Mouse owned in Long Beach. He asked the Imagineers to come up with something that could be used there. Possibly some kind of new park right where the Queen Mary was. This was known internally at WDI as the "Long Beach Project" that eventually became the proposed "Port Disney" Resort, that was the inspiration for "Tokyo DisneySEA." Eisney's plan would serve two-fold, it would be a potentially new park in the Southern California area and it would be used as leverage against Anaheim in his plans to build a new park there. He could in essence put both cities against one another to get the best deal possible.

As we all know, WestCot didn't happen. Port Disney didn't happen. The Disneyland Resort did happen. It was built on a vastly smaller scale that the grandiose plans that Eisner and the Imagineers had envisioned though. While WestCot was to be a 3 billion dollar project(in 1990 numbers, my friends) and Port Disney was a 2 billion dollar project(in 1991 numbers), the new Disneyland Resort was an expansion of 1.6 billion dollars(in 1998 dollars). While Anaheim got it's new resort... it was decidedly smaller because of the financial mess that came from Euro Disneyland. Eisner's grand plans crumbled under this burden and the resulting parks and resorts over the next decade would be much more frugal and underwheming. The Disneyland Hotel which was to get a fourth, new tower and massive retheming would instead get a modest makeover. Instead of WestCOT, we got Disney's California Adventure. Built for 650 million, this park was intended to be a modest one, able to make a profit from day one and not having to endure all the headaches Eisner had dealing with Euro Disneyland. First, he dreamed too big and then too small... but that is a story for another day.

Now the Disneyland Resort is in the middle of an expansion that will bring it closer to the original vision that the Imagineers had... not the exact same one, but one that in a decade could be just as lovely. Only a couple decades after it was supposed to be realized. Progress comes, but slowly my friends. The Disneyland Hotel should get that massive makeover that was planned back in the 90's. By spring we should see some form of an announcement and by the end of the decade the hotel will greet visitors with a brand new face... a brand new look.

Now, what became of the other properties. The Queen Mary, well it's still there... but that fabulous resort that was to be constructed around it is now Tokyo Disney Resort's Second Gate. Eisner had the company sell off all the other assets it bought from the Wrather Company to help justify its cost. Even the Lone Ranger was sold to another company. This character that could have joined may others like Peter Pan and Jack Sparrow... but the Masked Man was not wanted. Until now... It appears that Jerry Bruckheimer will be mounting a large scale, big budget version of the character. And since his production deal is with Walt Disney Studios, well guess how costly that is going to be for the Mouse? They're going to be charged many, many times what they sold him for. Oh and that expansion of DCA which is going to cost around 800 million for the First Phase is costing many times what the Suits originally thought it would when they opened the park back in 2001. Now over in Japan, where a version of the Port Disney concept came about... they're not doing any major construction. There's no need... it was built right the first time. They didn't make the mistakes the Mouse did. But they did profit from them. They got the fruit of the Imagineer's labor. California? It got the backlash of Euro Disney.

You have to ask yourself about that. In hindsight, with all this stuff about Michael Eisner wanting to purchase the Disneyland Hotel back from Jack Wrather...

How much did it actually cost for one of those rooms?
Posted by Honor Hunter at 6:45 AM

the monorail didn't extend to the disneyland hotel until june 1961 according to yesterland.

Sounds like those rooms were pretty expensive when you factor in all the negative press and lost revenue the Disney company planned on making. They figured anything with the Disney name on it would make people come and what they forgot was it was the Disney quality that made us want to go to a Disney park. Why go to a Six Flags park even if Disney does it? Great article, Honor. I too wish that California had gotten Port Disney. It would make my trip up from San Diego a lot more worthwhile.

Great article...I sometimes forget that Eisner did do a lot of very positive things...it's hard to imagine Disneyland without the new additions,(California Adventure, The Grand Californian, etc.),...even if they weren't fully realized.

I was working at the hotel when Disney bought it from Wrather. Certain things showed that it was obvious that Disney didn't own it before - it was run well enough, but not at the higher standards of Disney. Working for the in-house A/V company and usually being first into the meeting rooms or supplying equipment to guest rooms, we were visible and available, when hotel staff often weren't. We would be asked why chairs weren't set up yet, and found ourselves getting water... to get meetings started for the clients - the kind of service Disney is known for.
Also, it was interesting seeing the changes to the Disney Way - many moustaches had to be shaved and unions couldn't do anything about it since the new owners had their rules for working in their facilities.

We miss the Monorail Cafe and the atmosphere of Sargeant Preston's, as well as the cottage style rooms around the garden. Walt worked with Jack to have a variety of rooms and price ranges (read as "affordable")!
The Queen Mary was in poor shape at the time and another bad investment, even if only being used as a pawn. It would have been nice to see that property developed into what was planned, but the traffic congestion in Long Beach never would have been a pretty sight, even with the types of changes that happened with the freeways before DCA was built.

The Disneyland hotel is an interesting part of Disney History.

Please see my blog on the history of the Disneyland Hotel www.magicalhotel.blogspot.com