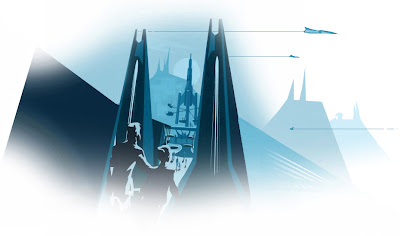 People always wonder what it is about Walt Disney that makes us Disney Geeks such a fan of him. Why is there such a devotion to his memory, his movies and his theme parks?

It's simple, really. Like most of life's problems and solutions to them, the answer lies right in front of you... but most simply refuse to accept or even believe the obvious.

It was Walt's optimism. His belief in things. America. The world. Humanity, itself...

He was positive and held that view throughout his life. Oh, I'm not saying he didn't have bad habit, he didn't sometime brood over things. The man was human, after-all... but through it all, he worked at being upbeat and not focusing on the negative. In this world of negative pessimism it's good to see there is a light at the end of the tunnel. Life is difficult, but it's not impossible and through it all it is very important to keep an outlook to help you get through it. Disney did that for people. He presented a more encouraging experience for people. He represented the notion that tomorrow could be a better day. That there was potential...

That there was hope.

That's hard to come by in this world today even more than when the Maestro was around to help us carry on.

Many people will misinterpret this as calling him perfect. Walt Disney was not a perfect man, but he was a great man... men don't have to be perfect to be great. But in this world where so much can go wrong, it's a calming feeling to know that some things can go right.

That is why Walt is revered so much. People head toward his optimism... Americans in general have always been optimistic people... and this man that started out just wanting to draw... just wanting to tell stories on film... just wanting to let families experience the magic he saw in person... well, he was like a light. A beacon, really.

A beacon that gave you confidence that there was another way. A better way. He was the best example of American Exceptionalism and a perfect example of how successful American culture is when spread throughout the world. Even then, Walt Disney was a world renowned name. An American product that was easily transferable and accepted around the globe. His optimism was not just an American trait, but an international one.

Take a look at Progressland and the other areas that Walt built for the 1964 World's Fair. These four areas put on display his philosophy as a man about what America and the world could accomplish. A world without limits or restrictions, a world that would be a better place for us:

So if you come across someone that gives you that look when you talk with enthusiasm about Disney... you can tell them the reason you love Walt is he gave you a reason to believe. That is after-all, the real Disney Magic.
Posted by Honor Hunter at 4:15 AM

Beautifully written... I can't express it any better. I will say just that to my friends when they give me that "look."

Well put. And, I think it could be taken further - in watching the latest Treasures DVD set, "Disneyland - Secrets..." I was reminded of other stories which also told of Walt many times asking for the seemingly impossible - and getting it, every time; with new attractions, new technologies, song writing, schedules and budgets... He knew it could be done and had a way of encouraging others to find a way to make it happen. It wasn't always easy, and they weren't always happy about it in the process, but also wanted to make it happen.
Also, when others looked at the bottom line, he understood what really mattered, and how that effected the bottom line even more, just by looking ahead a little bit even.

Thanks again for all you do here.

There was no Progressland area at the New York World's Fair. Disney's sponsors' pavillions, Illinois, Pepsi, General Electric and Ford were all located in their respective areas, State Governments, Industrial, and Transportation. Other fair's took progress as their theme, but at New York it was "Peace Through Understanding." General Electric's whole exhibit was termed "Progressland," featuring the Carousel Theater, the "sky dome spectacular" (a sort of planetarium, film on the inside of the dome show), and Electric :Living where we could glimpse a bit of the future on sale today.