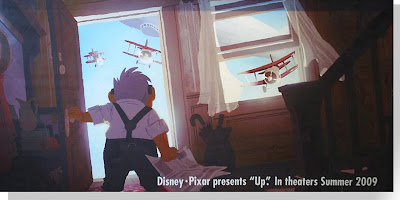 Apparently over at Disney's Hollywood Studios' Animation Exhibit there is a piece of concept art up(no pun intended) featuring a scene from Pixar's 2009 release: "Up". It appears to show an old gentleman with a very vivid imagination... very Don Quixote, if you ask me.