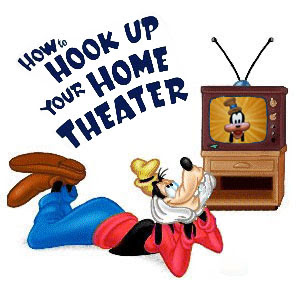 I was aiming to write about this the other day...

The Oscar Nominations have been announced and I like most of what was announced, except...

The nominations for Best Animated Short. Or to be more specific, the "lack" of a nomination is what has me a bit upset.

I don't want to take away from any of the shorts that have been nominated. This post is not about them. It's more about the Academy and its decision making process. I find it hard to believe the Academy let "How To Hook Up Your Home Theater" go without a nomination. Was this some form of slight against the short, or perhaps a sign that they've given up on Disney hand drawn animation? It could also be that the short plays so well as a bridge to the Disney shorts of the past that Academy members thought they were looking at an old cartoon. But then they wouldn't have or couldn't have watched the whole thing would be my guess. This wouldn't be the first time, Oscar winners are filled with films that even the voters didn't see, but felt should win. Even when it's just entertainment, it's political, sadly.

I'm not saying that Goofy's new short should win... although I wouldn't mind it. But the short should have been nominated. It deserves it for not only being a great animated short, but for showing that a group of talented animators can create something so wonderfully funny and memorable after having their skills neglected and tossed aside for half a decade.

Maybe they should expand the number? Maybe they should have to actually take a test to prove they watched what they vote for. Either way, the lack of a nomination for Disney's first new short in years is just plain goofy.
Posted by Honor Hunter at 4:32 AM

I stopped trying to figure out how the Academy made their decisions years ago. It's become apparent to me that they are judging films by a different standard than I do.

Whether it should have been nominated or not, Goofy's latest work had me literally howling with laughter.

It seems that the lack of nominations have generated a lot of commotion in the animation community.The fact that Disney has been historically overlooked does not help either.Just remember that movies like Snow white,The Wizard of OZ, and more have failed to garner major nominations but have since become classics; timeless standards in American film history. The point is that no one remembers who won best actor or what film won best picture. And for the most part, it's unimportant. The true test of a good film is the test of time.

I just saw this sort the other day on the Annies voting website. Gotta go with the Academy on this one. The short is mildly entertaining but nothing more. I'm glad the academy voters were able to look past the Disney label and judge the film for what it's worth.

Yeaa!!!!
It's a shame!!!!!!!!
One year ago the wonderful short "The Little Matchgirl" was nominated and it did'n win!
This is a great,great short!!
What has the Academy against the disney short?

Actually, Disney hasn't been historically overlooked in the short category. It was actually created almost as a way to honor Walt Disney shorts. Disney shorts won the award for many years from the time of its creation.

As far as this short being "mildly entertaining". I have to say anonymous that you are the first person to have seen this that has said that I've heard of. Almost everyone I've heard talk about it love it. Perhaps you never liked the original Goofy How To series?

It appears that the Academy prefers much more artful subjects that contain depth and meaning. The Goofy short was great animation with a fun story, but was not profound and did not make you sit back and think. That is why you will never see a comedy nominated for Best Picture or a comedian nominated for Best Actor/Actress. Whether or not you agree with that this appears where the Academy is heading.

"That is why you will never see a comedy nominated for Best Picture..."

I beg to differ. Last year Little Miss Sunshine was nominated for Best Picture and this year Juno is in the running as well.

I didn't see Juno yet, but Little Miss Sunshine isn' t a simple and only funny comedy. It has a lot of drama moments. It is very touching and sweet. I think that Juno has the same style.

Why do we listen to Jim Hill?

It seems that anyone who searches the internet for insider Disney info stumbles across Jim Hill. He has a long and dicey history with Disney (which I'll leave out in the interest of staying focused.) He's a frequent podcast guest because much like RATATOUILLE'S Anton Ego, his criticism is often fun to read.

But while he claims to be a fan of the mouse, his articles often paint a different picture. (This is the guy who wrote article after article about what an embarrassing failure RATATOUILLE was before finally admitting to its tremendous success.)

What has me hopping mad now is a recent post to his site about the Oscar nominations. He writes about "a pretty impressive performance by Miramax Films. Particularly when you take into consideration the meager number of nominations that the Walt Disney Pictures side of the studio received this year."

FACT: Buena Vista earned 10 nominations, tied with Warner Bros. for 3rd. Only Miramax and Paramount Vantage received more, and he credits the Max with PV's nominations.

While he lists each and every Miramax nomination to make it look so impressive, he waves off Disney with a simple, "The Walt Disney Pictures side of the studio had to settle for a number of tech-related nominations."


"To just to recap here ... If you work for the Miramax Films side of the Mouse House, Tuesday was a very "good news day" indeed. If -- on the other hand -- you work for the Walt Disney Pictures side of the studio and/or ABC ... Well, let's just say that Blue Monday arrived one day late."

The article is just mean, mean, mean. I can only read into it that Jim Hill has some kind of grudge with Disney and doesn't miss an opportunity to take cheap shots.

Anyone else notice this?

Count me among those who only found the Goofy short mildly entertaining. Not nearly as good as the Pixar shorts I've enjoyed over the years. Still, I was glad to see Disney give it a shot.