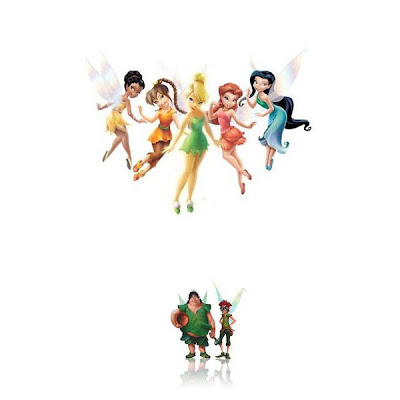 Last week when the details came out about the top selling DVDs of the week, it was no surprise that "Tinker Bell and the Great Fairy Rescue," the latest Disney Fairies film was number one right after its debut. Now, it's not the kind of film that I would normally watch, but I have seen these films and they're far more engaging as well as being remarkably higher quality than you would expect coming from a straight-to-DVD background. While they're aimed at girls, the tales have been far richer and the animation more detailed than I would have imagined from such a product.

And there is one reason for this: John Lasseter.

When he came to head animation at the Mouse he was handed the job of shoring up the division known (at least right now) as Disney Toon Studios. They're the division that put out all those Cheapquels that most Disney fans came to despise. Lasseter was responsible for putting a stop to milking all these franchises that had been going on since the late Eighties. There were still a couple in the production pipeline that had to be finished, but he made it clear that all new product would have to focus on a different direction. The Disney Fairies were just starting out and the plan was to focus on these as the next major DVD franchise. All this was started before the Pixar purchase and before he was put in charge and when he finally got a look at the first film in the series, John was clearly not happy with the direction of the story. Within a matter of months the film was delayed till the following year, the Suits in charge were gone and the division would report directly to John and Ed Catmull. These two guys are essentially in charge of all Disney animation with the exception of Walt Disney Television Animation, which should not be confused with DTS. Lasseter set about fixing the story of the first film and setting up a chronology for the entire series. There are still two more films to go in the series (Tinker Bell and the Mysterious Winter Woods and Tinker Bell: Race Through the Seasons) and no decision has been finalized as to if the series will continue after 2012. That will ultimately be determined by the sales/merchandising of the next two films. But as the Fairy series moves toward an eventual end, another series will start to take the place it had in the production pipeline: "Planes."

I've heard a lot of people venting about this series and many have felt as this as something along the lines of a desecration of the Lamp's label. But this series is something that has been in the planning for a couple years. As the Tink series was in full production, the powers that be realized that they had to address a couple of things. First, the focus on characters and issues that play primarily to girls/women. Second, the missed opportunity to maximize boys obsession with the "Cars" franchise. This gave John and the crew over at the Toon Studios the opportunity to work more in the world of Cars and focus on that male demographic. Unlike the Disney Fairies, this is a series that has had Lasseter's blessing from the get go. Tink was a series that he was given with the expectation of delivering, which he has in spades. This series, which storyboard artists will begin working on a second draft of the film in November after John's note are analyzed, will have even more focus than Fairies. The film is currently set for a late 2011/early 2012 release if everything continues running smoothly. Should this film be successful, the crew has plans to work on many of the other humanized vehicles of this world: Trains, Boats, ect. He's done a great job of turning the DVD series into a credible and profitable franchise, now he's got the opportunity to focus on expanding and growing the offerings of this division.

Which, judging by the sales figures of the latest film should make Suits quite happy...
Posted by Honor Hunter at 1:50 AM

One thing I can't quite understand is why Pixar isn't making Planes. There was the whole controversy about Disney making Toy Story 3 without Pixar's involvement and one of the deals in the acquisition was that Pixar would be responsible for any sequels or spin-offs. So why would Lasseter hand the job over to Disney instead of Pixar?

My wife and I have seen the first three Tinker Bell movies on DVD with our children, and we think the animation is quite beautiful, but both my wife and I agree that the 3rd Tinker Bell film was the weakest in story so far. The 1st and 2nd films had good plots and didn't seem slow. The 3rd one fell flat; I wonder if it is because they are trying to figure out how to continue to develop these characters. Not to mention the 3rd one is not even 80 minutes if I remember correct. Anyway, my children didn't mind when I sent the 3rd Tinker Bell film back (we Netflix these kinds of films first before we ever think about buying them). Where as bought the first two Tinker Bell films, we will not be purchasing the 3rd one. I hope the fourth one is better. Otherwise, we won't be buying that one either.

I loved part three of Tinker Bell and hope they keep this series running for more films after part five.

Great article, Hunter (as usual). There is a lot of excitement around Disney these days and the DisneyToons projects have a lot to do with that..AND Tangled of course!

Happy that our Tink film is being so well received, (except for the Stroud family, apparently) It's breaking records and the reviews have been remarkable.

Keep up the excellent work!

This isn't anything like the TS3 trouble between Jobs and Eisner...

The "Planes" characters are new and will be in the world of Cars or one like it. The Cars characters are not a part of it. This isn't a sequel that someone else is doing. And Lasseter is handling the film. No one else will be doing it. The original guy that made Cars 1 & 2 will be doing it so I don't think you'll have to worry about the content not being up to Pixar's standards.

Also remember that the Lamp is now a part of Disney, not just distributed by them...