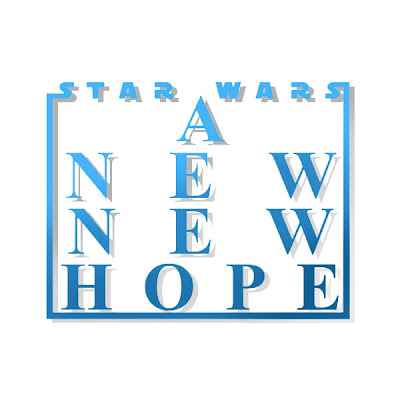 So the rumors of another Star Wars trilogy are flying again. The guys over at IESB are quoting anonymous sources inside the walls of Fortress Lucas that say it'll happen. It's a long way off, but it'll happen. They say that once George gets done with the 3D versions of the current Prequels/Originals, he'll set his sights on creating a whole new saga. One that takes place in the far future of the Star Wars Universe, perhaps a hundred or a thousand years out.

But then again, Lucas has said things about the prequels before he filmed them that contradicted a bunch of what came later. Plus the fact that they're denying this story. But really, even if it were true, would he talk much about it now? The last of the 3D conversions will be in theaters in 2017. So presuming he announce them a few years earlier, he'd have that first new film out in 2018. That's almost a decade out. And I personally don't think it'll be announced till the last film or darn near the release of it. This means it'll have to be filmed first and being as Lucas takes three years between films, this wouldn't likely see the light of day till 2019/20 at the earliest. That is a decade out. So we've got some ways to go before any of this will be concrete, if it's real at all.

Then there is my hope or dream that you know of. That within this decade, Bob Iger gets the nerve to have a meeting with Lucas and see about bringing all these projects into the Disney family. That way a new series of films would have the Disney logo right before you see the Lucasfilm logo. That would be nice and welcome. If there is any franchises that belong in the Mouse's catalog, it's Star Wars and Indiana Jones. They're identified with and inextricably linked with the parks, they might as well be Disney.

And if this third trilogy is actually made, they belong there...
Posted by Honor Hunter at 10:28 PM

Let us just hope that we end up with a good new Star Wars trilogy if this happens and not "Star Wars Episode VII: George Lucas and the Kingdom of the Jedi Crystal Yoda Skull with a side serving of Jar Jar Binks' decedents."

I say get Peter Jackson to make a new Star Wars film, in fact, let him and his writing partners do the screenplay. That way we can be sure it'll be good.

If not him, then Zack Snyder. He's always wanted to do an R rated Star Wars film. I don't think they'd let him do that, but maybe PG-13.

Then there is the obvious, David Fincher. Now let him make his epic. He could come in and direct the final one in the trilogy maybe?

Maybe Spielberg could do one? That'd be a great way to start a new trilogy.

George, please stop. Just stop. Put down your camera and retire. Do it while you still have whatever ounce of self dignity you have left. You have sucked all of the blood out of Star Wars. You don't need to make anymore money. You have more money than God. You have destroyed Star Wars and Indiana Jones. Like Yoda said you must let go. Spend your twilight years and enjoy the good life while you still have a few years left. Don't spend them further humiliating yourself by bastardizing your creations. Travel, take a cruise, golf, drink mai tais on the beach, hell, buy yourself a !@#$ing island in the South Pacific... anything... just stay the !@#$ away from films for the rest of your life!

The best idea in the first place was to set sequels and prequels apart from the original franchise.

It's a whole other universe. I;m sure there was better stories to tell than what came in the prequels, and they wouldn;t be constrained by the films IV to VI.

Other wars and conflicts.

The books and video games worked out ok?

I agree though, Lucas should bring in a fresh director it this was to happen.

It's too bad that Disney keeps getting stuck dredging up the bottom of the barrel. Does Star Wars fit with Disney? Not really. Neither does Marvel. But they're stuck with it, since Star Trek is owned by Paramount/CBS and DC by Warner. Both of those fit Disney's image far better, whether utopian techno-futurism or classic, near-mythological heroes.

Remember how back in the 70's they called Lucas and Spielberg the new Disney? That's because the things they were making were what Walt would have done had he been around. Not Condorman or even Tron and certainly NOT Mr. Spock and the space cadets.

God please tell Mr Lucas to stop! the last three ruined Star Wars for me! The acting was horrible besides Ewan McGregor. There was way way way to much CGI telling the story. I just refuse to even think that ep 1-3 exist let alone the Sp. Ed. 4 - 6. You ruined the idea of The Force with Midi-chlorians, the whole scene of Darth Vader ccoming off the operating table was a rip off of Mary Shelley's Frankenstein and cliche for that matter. Besides once again the acting sucked. Sorry I am going to stop now as you should as well. I am not even going to start with the last Indiana Jones and the skull that looked like an empty two liter bottle of soda stuffed with Saran Wrap. Just stop!

Honor, I give you this much, you are certainly consistent on this "Disney should buy Star Wars/Indy" kick. But as I've pointed to before, if Disney was really seriously interested in Star Wars, they wouldn't have let "Clone Wars" go to Cartoon Network. "Clone Wars" would have been the PERFECT anchor show for DisneyXD (and diversified their all-Marvel lineup) and that "Clone Wars" theatrical release would have given you a Star Wars film with the Disney castle logo on front. For whatever reason, it didn't happen.

Lucas is 66 and a tub of goo. How much longer does he have? Honestly. Smart money is on someone else if it ever happens.

**It's too bad that Disney keeps getting stuck dredging up the bottom of the barrel. Does Star Wars fit with Disney? Not really. Neither does Marvel.**

Ding ding ding we have a winner. You left one out though: the Muppets. What the HELL is Disney doing with those old rags?

Disney is becoming Proctor and Gamble. Just one big umbrella corporation owning a bunch of brands, and not creating anything internally. Let's see, what do have so far:

Does any self-respecting Star Wars fan even give a flying fig? Star Wars for me started on May 25th 1977 and ended about 2 minutes after seeinf The Phantom Crapfest. Like so many people, there are ONLY 3 Star Wars films to me.

This blog could use a little bit more objectivity regarding Disney and what properties it should own. It's blatantly obvious that this diseased company is bent on owning EVERYTHING and oppress those that refuse to sell out to them. Where the Star Wars props are concerned, they couldn't screw it up more than Lucas has anyway.

It's his blog and his views...

There's no "objectivity" to it, nor should there be. It's an opinion blog and here you get those of his and those other Blue Sky writers.

Where the hell is it that he's supposed to do that? He's not a frickin' news reporter, dude!

I all fairness Pixar are an obsolute fit. If only the other animated product had remained so consitsant.

ABC is neither here nor there. For a moment a few years ago where it looked like it would work. As it looks now I can't think of an interesting ABC show anymore.

ESPN is a valuable association, but yes it doesn't really fit.

Muppets do work, they are a legacy product. Something that will not work all the time. But nostagia and edge may carry them forwards.

Besides not everything can be safe Mickey Mouse or pretty Princesses.

MARVEL - albeit nether really associated with Disney, fits more then the suggested DC. Those heroes carry better messages and themes than DC - which is mostly successful for iconography. But 99% of the world will never associate Disney and MARVEL.

The mentioning of the video games companies and properties are a poor comparison, because at the end of the day they are doing things that are more inventive or sucessful than anything from Disney's gaming heritage.

hey i am hope ben skywaker luke son . and i hope the star wars will doing it for entire universe ! inculde earth milky way galay

Since George has finished with "The Darth Vader Story", he can now continue the story after Episode VI. Carrie Fisher, Harrison Ford and Mark Hamill could reprise their roles 30 years later. Luke could be married to Mara Jade. Han and Leia's kids could be grown, etc. of course R2-D2 and C-3PO will still be around.